High-flow measurements on two rivers in eastern Iowa are higher than any level since 2008 in several locations, the U.S. Geological Survey (USGS) said on Monday, as residents of the city of Cedar Rapids braced for near-record floodwaters. 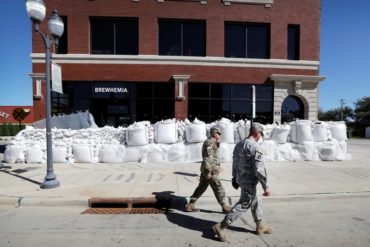 “Since the heavy rains fell last Wednesday in northern Iowa, our crews have been hard at work every day visiting the USGS streamgages to ensure everything is working as it should and making streamflow measurements vital to the National Weather Service forecasts,” said Jon Nania, supervisory hydrologist for the USGS Iowa Water Science Center. “We are following the flood crest downstream on the Cedar and Wapsipincon Rivers and today we are in Palo, Cedar Rapids and Anamosa to make sure communities have the most accurate information,” he said in the release.

USGS scientists collect critical streamflow and water-quality data that are used by the National Weather Service to develop flood forecasts, the U.S. Army Corps of Engineers to manage flood control and various state and local agencies in their flood response activities and management of drinking water supplies. The information the USGS collects will not only help during this current flood, but will provide better information if these levels are seen again in the future, Nania added.

The Associated Press reported on Tuesday that after days of sandbagging and erecting an extensive system of flood barriers, residents and officials in Iowa’s second-largest city were “simply waiting to see how high the Cedar River would rise and what impact the flood would have.” Entire neighbourhoods and the downtown area were largely abandoned as residents in low-lying areas heeded the city’s call to evacuate, the Associated Press said. Schools were cancelled and many businesses were closed.

The Cedar River was expected to crest Tuesday at 23 feet, the second-largest flood in the city’s history, behind that of June 2008. The river level had risen to nearly 22 feet by dawn Tuesday – six feet above major flood stage.

Current view of the rising Wapsipinicon River in Olin, Iowa. Crest not expected here for another 72-80 hours. #IowaFlood #Flood2016 pic.twitter.com/mlVdLyC268

On Sept. 23, Iowa Governor Terry Branstad issued a proclamation of disaster emergency for 13 counties affected by the flooding, allowing state resources to be utilized to respond to and recover from the effects of the severe flooding. The proclamation also activates the Iowa National Guard to assist in the response, noted a statement from the Office of the Governor of Iowa. On Monday, an additional four counties were added to the proclamation.

There are nearly 200 USGS-operated streamgages in Iowa that measure water levels, streamflow and rainfall. Crews will be following the flood downstream, making discharge measurements until the floodwaters recede, the USGS said in the release.

– With files from the Associated Press

Major flooding ongoing in Iowa. The Shell Rock River crested over the 2008 record. Many other rivers cresting at major flood stage. #IAwx pic.twitter.com/TDRinhsNBN