The City of Prince Albert, Sask. has begun its claims process seeking financial remuneration from Husky Energy following a lengthy oil spill that the city says has cost it millions of dollars. 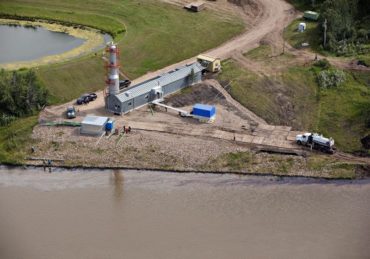 Husky crews work to clean up an oil spill on the North Saskatchewan river near Maidstone, Sask on Friday July 22, 2016. Husky Energy has said between 200,000 and 250,000 litres of crude oil and other material leaked into the river on Thursday from its pipeline. THE CANADIAN PRESS/Jason Franson

The city  is seeking compensation on a wide variety of costs, including the salaries of city workers and contractors and “material costs in constructing two water pipelines as alternative water sources for the city” following the oil spill contamination of the North Saskatchewan River that forced the city to close its water treatment plant intake to the river.

Prince Albert is also seeking worker wage costs involved with the running of the city’s emergency operations and general inquiry centres during the crisis, the city said in a press release on Wednesday.

In addition, the city is looking to recoup the lost wages from outdoor workers who were temporarily laid off during the almost three weeks shut-down of civic facilities such as the Kinsmen Water Park. “The city has committed to paying the salaries of 35 full and part-time lifeguard staff that were temporarily laid off and will be seeking compensation from Husky Energy on behalf of its staff,” the release said. The water park is scheduled to reopen on Friday.

“We sympathize with the lifeguards that were temporarily laid off during this crisis,” said City of Prince Albert Mayor Greg Dionne in the release. “The majority of the staff is students that rely on their wages earned during the summer to pay for tuition and living costs in the fall when they return to school. The city is doing their part to make sure they are taken care of and we have no doubt that Husky will then reimburse us for the lost hours to our staff and facilities during the oil spill situation,” he said.

Financial services firm Deloitte has been hired by the city to assist in the claims process with Husky Energy and preliminary meetings with Husky Energy have been positive, the city reported, adding that it anticipates a 24-hour claim reimbursement from Husky Energy for all city invoices submitted.

In early August, Braemar Adjusting – the insurance adjuster handling all Husky Energy claims – hosted a claims clinic to assist the public in all areas of the claims process. Both individuals and businesses could file claims at the centre. Claims centre will also open on Friday and Saturday in North Battleford, which was also affected by the spill.

Husky Energy originally reported that between 200,000 and 250,000 litres of crude oil and other material leaked into the North Saskatchewan River on the morning of July 21 near Maidstone, Sask.