The City of Toronto is taking an all-encompassing approach to automated vehicles by examining their potential impact on a variety of city departments, attendees to the RIMS Canada Conference heard on Monday. 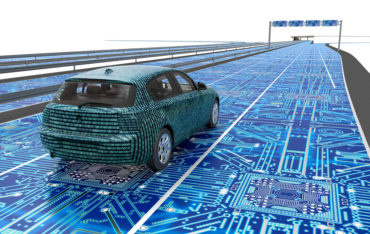 “So we don’t want to make decisions in a transportation context that are going to have negative consequences on other city divisions or other city responsibilities,” he said. “Automated vehicles are not just a transportation issue. This is why we think it’s very important that we have these discussions within the city.”

The city has been trying to get a better understanding of the issue through staff discussions, strategizing and working with the community and universities. And although it does not have an “official policy or position on automated vehicles,” it has been working on the issue for about three years, Lanyon reported. “We’re planning for every possible scenario.”

Lanyon said that the city started off with a 2015 discussion paper from the University of Toronto titled Driving Changes. Although “slightly dated now – the thinking changes very quickly,” Lanyon said, the city created a formal working group after discussions related to the paper. “I’m proud to say this has become an international best practice, so we’ve explained how we formed this working group to other cities like London, Paris, Helsinki, Buenos Aires,” he told conference attendees. “Within transportation, we can’t sit idly by and wait for everybody, we do have a lead role to play. We formed our own work plan on how to tackle these issues.”

For example, the city’s winter maintenance contract for snow plowing is currently on a seven-year cycle. “The way that automated vehicles might come out, seven years might be a very long time,” Lanyon noted. “How do we start thinking before we get into that cycle about how we integrate automated vehicles throughout those seven years?” he asked.

The City of Toronto is also working on creating an AV policy position to recommend to city council that they move forward on AVs. The city has also partnered with Ryerson University to create some “alternate futures,” involving four scenarios that a Master’s class created about what the City of Toronto and the Greater Toronto Area might look like in terms of transportation in 2031. As an example, one idea could involve the creation of an app hooked up to an AV that could automatically find free parking in the area. “Let’s say that’s three-hour parking and you’re at work for eight hours,” Lanyon suggested. “At 2 hours and 59 minutes, that automated vehicle is going to move because it’s set to that app. These are things that really make sense once you really think about it.”

Another big issue for the city is going to be zero occupant vehicles, Lanyon said. In the transportation industry, there has been worry over the average auto occupancy for years, with more people driving alone and fewer sharing a ride. “What happens when average auto occupancy drops below one, so the average vehicle has less than one person in it?” he asked. “How do we deal with that in the transportation network context? It’s a problem we’ve never had before. So they were thinking about taxing a zero occupant vehicle, different pricing mechanisms that might influence demand.”

Regulation is yet another area of concern, Lanyon said, pointing to city bylaws that indicate that “no person shall drive a vehicle on a sidewalk. Well, what is the legal definition of person?” he asked conference attendees. “What if there is no person in the vehicle and that vehicle drives on the sidewalk? Can we enforce it? Who does the ticket go to? A lot of different questions about, even, how do we deal with an automated vehicle that just pops up on the street?”

The RIMS Canada Conference is being held at the Metro Toronto Convention Centre until Wednesday. The session Autonomous Vehicles and the Connected City also heard from Jim Kidd, project manager at the City of Toronto’s insurance and risk management section and George R. Wray, a partner at Borden Ladner Gervais LLP.