The City of Toronto announced on Tuesday that it has issued a Private Transportation Company (PTC) licence to Uber, calling it the first of its kind in Canada. 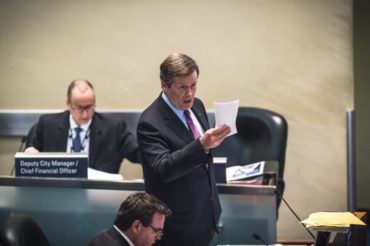 Mayor John Tory discusses the future of Uber in the Toronto City Hall Chambers in anticipation for a vote to determining the ridesharing app’s future in Toronto on Tuesday, May 3, 2016. THE CANADIAN PRESS/Aaron Vincent Elkaim

Since Toronto City Council gave Uber the green light to operate legally in Toronto on May 3, city staff have been preparing and implementing the new Vehicle-for-Hire Bylaw, which came into effect on July 15. “This work included significant technology enhancements, system programming, and organizational and business process changes,” the city said in a press release.

Under the bylaw, “all taxicab, limousine and PTC vehicles will be required to meet the city’s standards for vehicle inspections and carry automobile liability insurance with a minimum of $2 million coverage,” said background information from the city.

The bylaw also includes changes implemented for the taxi industry, including “flexible” ownership for taxicab owners, with permission to incorporate and own more than one taxicab; the ability for the industry to set fares for trips booked in advance; and decreased annual licensing fees. 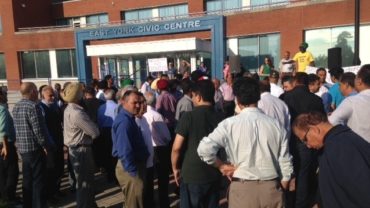 With the issuance of Uber’s PTC licence, the city will begin to screen and issue PTC driver licences to individuals performing vehicle-for-hire services through UberX. Screening includes criminal background and driver abstract checks, vehicle inspection certificates and insurance, the city said in the release.

The United Taxi Workers’ Association, which represents about 3,500 drivers in the Greater Toronto Area, held a protest early Wednesday morning. Media reports have suggested that cab drivers are “frustrated with the city’s lack of enforcement around UberX.”