The City of Windsor in southwestern Ontario has reported nearly 2,700 basement flooding reports as of late Wednesday afternoon. 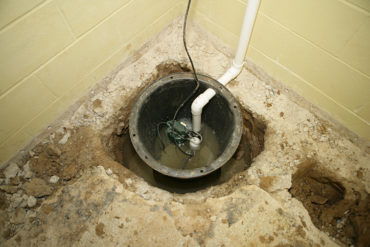 The city continues to recover from a severe rain event on Aug. 29 that resulted in flooded roads, properties and basements. As of 3:45 p.m. on Aug. 30, Windsor City Services (311) had received 2,688 basement flooding reports, both online and over the phone, the City of Windsor said in a press release.

On Tuesday, the city reported in a separate media statement that “all storm water management systems are working as designed, but sheer volume is overwhelming the system.” There were also reports of manholes dislodged by the water. All sports fields in the city remain “completely saturated” from the rainfall and remained closed as of Wednesday.

The Canadian Press reported earlier this week that some areas were hit with more than 200 millimetres of rain in less than 24 hours. The City of Windsor saw between 45 and 88 mm of rain Monday night and another 50 mm by Tuesday afternoon, the Canadian Press said, quoting Ria Alsen, a severe weather meteorologist with Environment Canada. The nearby town of LaSalle was the hardest hit, with 125 mm of rain Monday and another 10 mm on Tuesday. 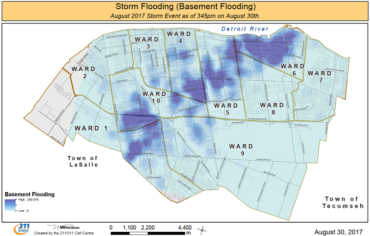 “The City of Windsor has devoted significant resources in recent years aimed at reducing the likelihood of basement flooding, but events like this one are overwhelming,” the city concluded in the statement from Tuesday.

The City of Windsor offers a Basement Flooding Protection Subsidy Program, which offers residents a financial subsidy to install a sump pump overflow and/or backwater valve(s) and/or disconnect foundation drains from a floor drain. The maximum eligible subsidy limit is $2,800 per home/unit.