The General Insurance Association of Japan (GIAJ) reports that claims paid in the wake of the Kumamoto earthquake in mid-April totalled 317 billion yen, or about US$3.1 billion, as of June 20. 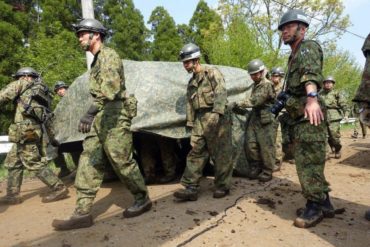 Global catastrophe risk management firm RMS reported that in mid-April, there was a magnitude 7.0 earthquake in Japan’s Kumamoto Prefecture and an earlier magnitude 6.4 tremor.

“Severe damage and losses were inflicted across Kumamoto and Oita Prefecture due to a series of earthquakes with the Japanese seismic intensity scale of 7 (magnitude 6.5 to 7.3),” GIAJ chairman Hishahit Suzuki said in a statement issued June 9.

“During my visit to the affected area in the wake of the quake, the overwhelming damage reminded me of the menace of natural disasters,” Suzuki noted. “We have responded to this disaster with a firm sense of our social mission of ensuring prompt payment of ‘earthquake insurance on dwelling risks’ claims.”

In April, catastrophe modeling firm AIR Worldwide issued an estimate that industry insured losses to properties from the earthquake that struck Kumamoto Prefecture on Japan’s Kyushu Island will be between 180 billion yen (US$1.7 billion) and 320 billion yen (US$2.9 billion). The estimates reflect insured physical damage to onshore property (residential, commercial/industrial, mutual), both structures and their contents, and ground shaking, fire following and liquefaction.

Related: Insured losses from Japan earthquakes in April could be between US$1.7 billion and US$2.9 billion

AIR Worldwide cited the Japan Fire and Disaster Management Agency, which estimated at the time that more than 3,900 residences and 120 non-residential buildings were damaged or destroyed, a number of mudslides resulted and 14 fires were attributed to the temblors. Also, there were reports of power and water outages, damage to highways, rail lines, bridges and other infrastructure, short-term cancellation of some airline and train service, and significant supply chain and production interruption for regional industries.

And in mid-May, RMS issued a loss estimate of US$800 million to US$1.2 billion for the quake damage. The estimate “is based on assumed insurance penetration rates and includes insured physical damage to property due to ground-shaking, fire following earthquake and liquefaction,” the company reports.

In addition, RMS updated its economic damage estimate for the two mid-April quakes to between US$5.5 billion and US$7.5 billion.

Among other things, the economic and industry damage estimate do not include business interruption or alternative living expense impacts, damage to infrastructure, auto or post-event loss amplification such as economic demand surge and price increases, the RMS statement notes.

As of June 6, claims figures for Kumamoto “surpassed those of the Great Hanshin-Awaji Earthquake 1995 to become the second largest cause of claim payments for ‘earthquake insurance on dwelling risks,’” Suzuki noted June 9.

“We settled 86% of received cases within a little less than two months of the quake. The lessons from the Great East Japan Earthquakes, which we utilized on a series of operations from the reception of claims reports to payments, enabled us to reach this achievement,” he added.

The national earthquake insurance penetration rate in Japan is about 60%, which differs greatly among prefectures, Suzuki pointed out.