Clean up underway after 1,000 litres of bio diesel spills at B.C. fish farm

PORT HARDY, B.C. – The leader of a First Nation off the north coast of Vancouver Island says he’s worried about the impact a fuel spill at a nearby fish farm will have on his community’s food source. 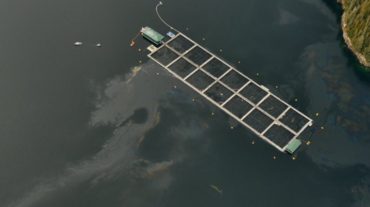 The company that owns the site of the spill, Cermaq Canada, reported that up to 1,500 litres of bio diesel was spilled. Photo: @ChiefBobbyc. Photo from Twyla Roscovich.

Bob Chamberlin, elected chief councillor of Kwikwasat’inuxw Haxwa’mis First Nation, said the area is critical for clam digging, which is a major food source to the community.

The federal fisheries department said the coast guard received a report early Sunday morning about a spill from a fuel tank at an Atlantic salmon aquaculture site in Echo Bay, about 70 kilometres east of Port Hardy.

The statement said an estimated 900 to 1,000 litres of bio diesel overflowed into the water when a fuel pump was left on overnight.

The company that owns the site, Cermaq Canada, issued a statement that said its records show that up to 1,500 litres was spilled.

Staff at the fish farm put out absorbent pads to soak up the fuel, and most of the spill is contained in the fish pens, but Cermaq said the fish are showing “normal behaviour.”

However Chamberlin said video footage taken from a helicopter above the spill Sunday shows fuel has leaked well beyond the confines of the farm.

The community has long been opposed to fish farms in the area because they were concerned about how they would affect the environment and now their fears have been realized, he said.

“To have, either through a lack of training or a lack of diligence on the farm, to have an accident such as this on the farm, it’s utterly unacceptable. And there needs to be a very high level of accountability here.”

The coast guard, officials from the ministry of environment, and a marine clean-up company are responding to the spill, and clean-up is on-going.

Chamberlin said there will be a need for the First Nation and other groups to monitor how far the spill reached and evaluate how it affects the area.