Building infrastructure to reduce weather-related losses can benefit society for generations, but the problem of climate change is “so global and complex” that there will always be more work required, insurance company executives suggested Wednesday at a conference in Toronto. 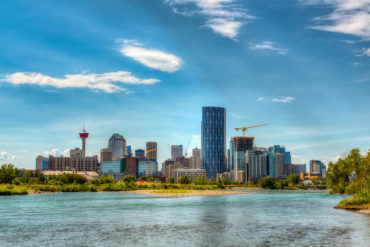 Swiss Re Ltd. officials have been working “patiently and restlessly,” for years, “promoting awareness around” the topic of climate change, said Veronica Scotti, president and chief executive officer of Swiss Re Canada, during Globe Capital 2017 Toronto.

“It takes a long time for people to actually start to believe,” Scotti said during a panel discussion at Globe Capital, held at the Four Seasons Hotel in the Toronto neighbourhood of Yorkville.

“After 30 years people are starting to believe climate change is real and something that needs mitigation and adaptation,” Scotti added.

“An investment in climate adaptation has a long-lasting and substantial impact,” said Natalie Higgins, vice president of Intact Financial Corporation. “At a community level in particular, there are many cost-effective examples on how investment up front can mitigate against future losses.”

Higgins cited as an example the Red River Floodway in Manitoba.

“In 1963, a $63-million investment was made in the development of the Red River Floodway,” Higgins said during the panel, titled Climate Adaptation: Is Canada Investing Aggressively Enough to Mitigate the Risks. “In 2014, we saw an additional $627-million expansion to this effort. It’s estimated, over the period from 1963 to today, that this floodway has saved Winnipeg residents $40 billion in potential losses.”

The third panelist was Maryam Golnaraghi, director of extreme events and climate risks program for The Geneva Association, Canada.

“When you look at Canada, you see that socioeconomic losses associated with extreme weather events is on the rise,” Golnaraghi said. “And where we see the impact is on critical infrastructure, housing, commercial buildings, small and medium-sized businesses. This is where we are seeing the impacts. When we look at the top 10 most costly events in Canada, three have been flooding, two wildfires and five severe storms, so these are weather-related or further exacerbated by weather conditions.”

Globe Capital was held both Tuesday and Wednesday.

“2016 has been hottest year on record,” Scotti said. “It has also been, for Canada, the one with the largest wildfire on recorded history.”

A.M. Best Company Inc. estimated earlier that insured losses from the Alberta wildfire in the spring of 2016 could be $3.6 billion to $4.7 billion.

Until 2016, most expensive natural catastrophe, measured by insured loss, in Canada, was the 2013 flood affecting southern Alberta.

“There is a lot that we can do … to incent the individual homeowner to take mitigation action in their house,” Higgins said Wednesday. “Things like providing discounts for people who don’t finish a basement for example. There is a tremendous trend in Canada where people are putting high-quality finishes in their basements today which didn’t happen 20 years ago, but now they have their media centres in their basements, so when they suffer a flood loss, the cost of it is tremendous.”

So is Canada is “doing enough” to adapt to climate change?

“I would say you can never do enough,” Scotti said. “The problem is so global and complex. There is always work at hand. That said, I think we have seen a tremendous shift in attention with the current (federal) government.”