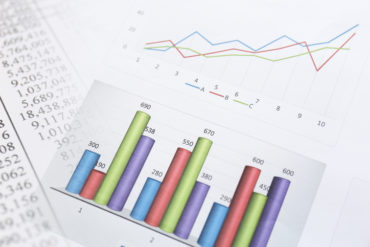 “It is common for severe weather to be a factor in the first quarter, and that was the case this year as windstorms in Ontario and the Atlantic made an impact on our results,” Rob Wesseling, president and CEO of The Co-operators said in a statement on Monday, when the insurer released its financial results. “Claims costs increased compared to the same period the year prior in our home, auto and commercial lines of business.”

“We continue to achieve good growth, as we increased direct written premium across all lines of business,” Wesseling said. “That partially offset the increased claims costs, as did an improvement in our investment performance.”

DWP improvements during the most recent quarter were attributable to growth in policy and vehicle count in all lines of business, paired with higher average home and farm premiums, The Co-operators reported in the statement. In the first quarter of this year, DWP increased by 4% or $20.8 million. NEP increased during the first quarter by 3.5% or $20.8 million compared to the same period last year. The increase in NEP was seen in all geographic regions and all product lines, with the exception of the commercial line of business, The Co-operators said. 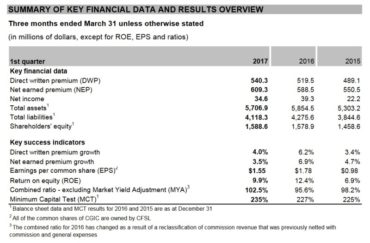 As for the combined ratio, undiscounted net claims and adjustment expenses have increased by 12.6% from the first quarter of 2016, bringing the loss ratio to 68%. The increase was driven by the frequency of current accident year claims within the home line of business, primarily as a result of windstorms in the Ontario and Atlantic regions, compared to less severe weather in the same period of the prior year. Excluding the windstorms, the insurer experienced an increase in the frequency of current accident year claims within the home and auto lines of business, combined with an increase in the severity of current accident year claims in the commercial line of business, the statement said. The expense ratio increased by 1.4 percentage points, to 34.5%, as compared to the same period in 2016, driven by an increase in information technology system initiatives and higher distribution costs.

The insurer’s underwriting loss of $15.1 million in Q1 2017 deteriorated from an underwriting gain of $25.8 million in the same period of 2016, the company’s MD&A report noted. This was the result of an increase in current accident year claims across all lines of business, expect farm, partially offset by continued premium growth, mainly in auto and home lines.

Net investment income and gains increased by $33.1 million versus the first quarter of 2016 on the strength of investment gains in the company’s preferred share portfolio. In the first quarter of 2017, unrealized preferred share gains were $20.6 million in contrast to the $10.2 million in unrealized losses recognized during the same period in 2016.