Combined ratio up 18 points for PartnerRe

PartnerRe Ltd. has reported an 18-point deterioration in its combined ratio for the three months ending June 30, with the wildfire in Alberta contributing 7.5 points, or $73 million, to its loss expenses for the second quarter of this year. All figures, unless otherwise stated, are in United States dollars. 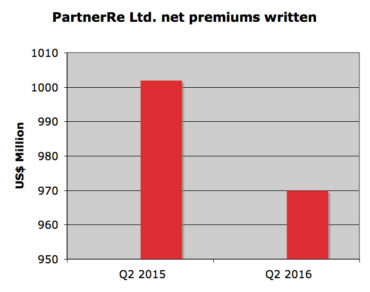 PartnerRe was publicly traded until March 18, when EXOR S.p.A. acquired the firm. Turin, Italy-based EXOR, owned by the Agnelli family, also owns a significant minority of Fiat Chrysler Automobile and of CNH Industrial NV, which manufactures power trains and heavy equipment under the Case and New Holland brands.

A wildfire that started in early May resulted in the evacuation of about 80,000 in and near Fort McMurray, Alberta. On July 6, Catastrophe Indices and Quantification Inc. (CatIQ) said it estimated insured damage from the wildfire is $3.58 billion, a figure which is subject to change. Though the 2013 floods in southern Alberta had total economic losses of about Cdn $6 billion, Insurance Bureau of Canada reported earlier the insured loss from the 2013 floods was about Cdn $1.7 billion, making this year’s Fort McMurray disaster Canada’s most expensive natural catastrophe in history. The third most expensive is the 1998 ice storm.

In addition to the Fort McMurray wildfire and one energy loss, PartnerRe’s Q2 results were also affected by hail storms in April in Texas, floods in Germany and France and two earthquakes that struck near Kumamoto, Japan in April, PartnerRe noted July 28. 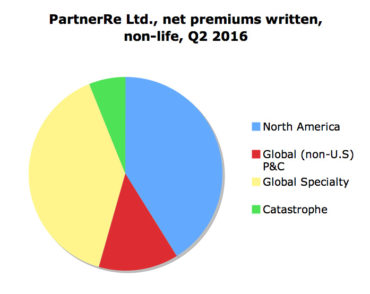 PartnerRe reported net premiums written (including life and health) of $1.254 billion in the latest quarter, down 5% from $1.322 billion in Q2 2015. In non-life, net premiums written dropped 4%, from $1.009 billion in Q2 2015 to $970 million in the most recent quarter. That drop was “primarily driven by continued competitive pricing and market conditions across almost all lines of business which resulted in the Company reducing participations and cancelling business, as well as by higher premiums ceded under retrocessional contracts in the Catastrophe sub-segment and downward prior year premium adjustments,” PartnerRe stated. “These decreases were partially offset by new business, which was mainly written in certain lines of our Global Specialty sub-segment and in the casualty and specialty lines of the North America sub-segment.”

In January, 2015, PartnerRe and Axis Capital Holdings Ltd. announced their boards were recommending the firms merge. That merger agreement – which PartnerRe eventually terminated – would have formed a global top 5 reinsurer, Axis Capital said at the time. EXOR originally announced its offer to acquire PartnerRe in April, 2015. Initially the PartnerRe board recommended shareholders vote against selling to EXOR but reversed its position after EXOR increased the value of its offer.

With the EXOR acquisition, EXOR chairman and chief executive officer John Elkann became chairman of the board of PartnerRe. The firm announced March 24 the appointment of Emmanuel Clarke PartnerRe CEO.