Combined ratio up 2.1 points, non-life premiums down 14% at PartnerRe

A change in the measure used to calculate lump sum awards in bodily injury cases in Britain had an impact on PartnerRe Ltd.’s financial results, which the Hamilton, Bermuda insurer released Wednesday. 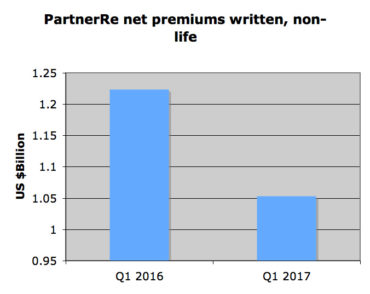 The deterioration was “primarily due to lower favorable prior years’ reserve development, partially offset by lower other operating expenses, acquisition costs and mid-sized loss activity. The prior years’ reserve development was impacted by a $35-million charge (4.6 points) related to the change in the Ogden discount rate” in the United Kingdom, PartnerRe said in a release. All figures are in United States dollars.

“Effective March 20, 2017, the Ogden Rate decreased from plus 2.5% to minus 0.75%, which represents the first rate change since 2001,” Markel said April 26 when it released its Q1 financials. Markel said the reduction in the Ogden Rate increased expected claims payments on its auto casualty exposures in Britain.

PartnerRe writes both reinsurance and commercial primary coverages, such as auto, agriculture, aviation, surety, energy and marine, among others. 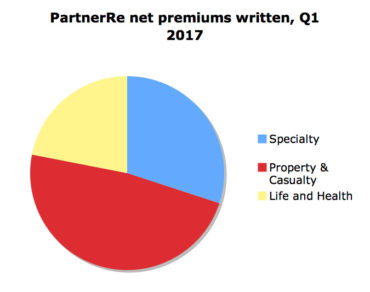 The firm was acquired in March, 2016 by EXOR NV of Turin, Italy, an investment firm whose holdings include a large minority of Fiat-Chrysler Automobile. In January, 2015 PartnerRe’s its board of directors was recommending a merger with Axis Capital Holdings Ltd. Axis was recommending the same things to its shareholders, but EXOR made a takeover offer later in 2015.

PartnerRe reported severance and transaction-related costs of $8 million, related to the EXOR acquisition, in the most recent quarter, compared to $153 million in Q1 2016.

PartnerRe said Wednesday its underwriting result in non-life was $28 million for the first quarter of this year, down from $52 million in Q1 2016.