Allied World Assurance Company Holdings AG, which is expected to have a new Canadian corporate parent, recently reported a 3.1-point deterioration, year over year, in its first-quarter combined ratio, nearly a month after Cyclone Debbie hit the north shore of Australia’s Queensland coast. 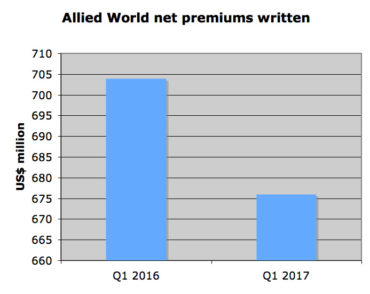 Zug, Switzerland-based Allied World, whose coverages include commercial liability, released Wednesday its financial results for the three months ending March 31. Its combined ratio in the most recent quarter was 99.1% up 3.1 points from 96% in Q1 2016.

Four months ago, Allied World announced it has agreed to be acquired by Toronto-based Fairfax Financial Holdings Ltd.

During the most recent quarter, Allied World said it “experienced $11.0 million in catastrophe losses, or 2.0 percentage points on the loss and loss expense ratio, related to Cyclone Debbie, compared to no reportable catastrophe losses in prior year quarter.” Of its cat losses in the first three months of this year, “$7.5 million was recorded in the Reinsurance segment and $3.5 million was recorded in the Global Markets Insurance segment.”

All figures are in U.S. dollars.

From a branch office in Toronto, Allied World Canada’s coverages include privacy breach, directors and officers, representations and warranty and energy risks. Worldwide, Allied World writes insurance in the Lloyd’s market through Syndicate 2232. 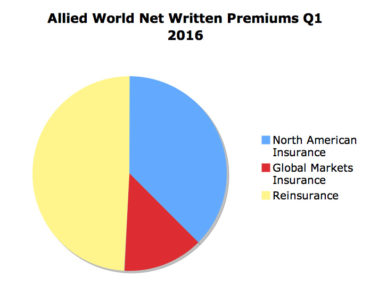 The proposed acquisition by Fairfax, announced Dec. 18, was valued at the time at nearly $5 billion. Fairfax has said if the deal goes through, Allied World shareholders would receive a combination of Fairfax shares and cash equal to $54 per Allied World share.

Fairfax’s holdings include Toronto-based Northbridge Insurance, Stamford, Conn.-based OdysseyRe and Brit PLC, a London-based insurance provider in the Lloyd’s market. Fairfax is seeking partners to help fund the cash component of its offers. The first partner to go public was Ontario Municipal Employees Retirement System, which said earlier it agreed to chip in US$1 billion, which would give OMERS about 21% of Allied World’s issued and outstanding shares.

An acquisition by Fairfax is subject to approval by shareholders of Allied World and by securities, insurance and competition regulators. Fairfax has the option to fund part of the cash portion by issuing debt or equity or by bringing in partners. Depending on how much equity Fairfax issues, the deal could also require approval of shareholders of Fairfax, which is traded on the Toronto Stock Exchange.