Combined ratio down 4.6 points for Everest Re

Everest Re Group Ltd. reported Monday catastrophe losses, net of reinsurance, of $53.5 million in the three months ending June 30, with a 4.6-point improvement in its Q2 combined ratio to 90.5%. All figures are in United States dollars. 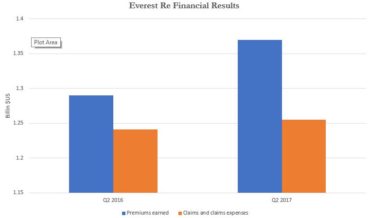 Hamilton, Bermuda-based Everest Re’s combined ratio in the second quarter of 2016 was 95.1%, the company noted.

Everest Re reported “current quarter catastrophe losses from the South African (Knysna) fires, Colorado hailstorms, and Peru flooding” adding the “net impact” of those losses, after reinstatement premiums and taxes, was $46.6 million.

Everest Re reported earlier that effective Aug. 24, 2016, it sold Heartland Crop Insurance Company, a subsidiary that is a managing agent for crop insurance, to CGB Diversified Services Inc.

Excluding the Heartland Crop business that was sold in 2016, “the insurance segment premium was up 41%, quarter over quarter,” Everest Re said July 24, 2017.

Formed in 1973, Everest Re was a subsidiary of The Prudential Insurance Company of America until Prudential sold its interest in 1995 in an initial public offering.

Everest Insurance Company of Canada is licensed to write property and casualty insurance in all provinces.

Of its international segment, Everest Re reported earlier that gross written premiums from the Canadian branch in 2016 were $124.6 million “and consisted of 51.1% of excess property business, 27.1% of excess casualty business, 13.6% of pro rata casualty business and 8.2% of pro rata property business.”  Of the $124.6 million in GWP from the Canadian branch, “83.9% consisted of treaty reinsurance, while 16.1% was facultative reinsurance,” Everest Re reported in February of its 2016 results.

At the time, the carrier reported that its Everest Specialty Commercial unit wrote $547.9 million in premiums in 2016, of which $74.1 million was from the Canadian office.