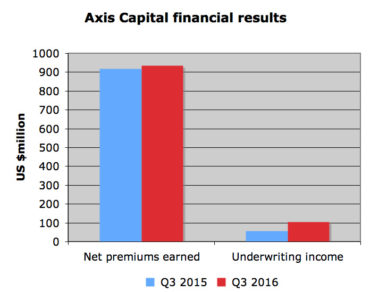 Pembroke, Bermuda-based Axis Capital reported net premiums earned of $934.4 million in the latest quarter, compared to $919.3 million in Q3 2015. All figures are in United States dollars.

Its estimated catastrophe and weather-related pre-tax net losses were $22 million in the latest quarter, compared to $43 million in Q3 2015. 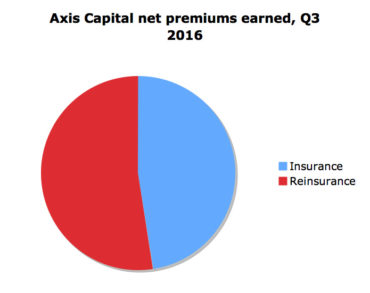 In insurance, the combined ratio was 94.4% in the latest quarter, down 4.2 points from

During the latest quarter, net premiums earned were $489.7 million in reinsurance and $444.7 million in insurance.

Axis Capital last year reached a tentative agreement to merge with PartnerRe Ltd., which also writes both commercial specialty and reinsurance. But ultimately EXOR S.p.A. acquired PartnerRe after a bidding war. EXOR, based in Turin, Italy, is an investment confirm controlled by the Agnelli family. EXOR’s effectively controls Fiat Chrysler Automobile and the CNH Industrial, which makes farm and construction equipment under the Case and New Holland brands.