Munich Re reported Tuesday a 3.9-point improvement in its combined ratio in property and casualty reinsurance, as the Munich-based insurer released about 250 million euros in reserves during the first three months of this year. 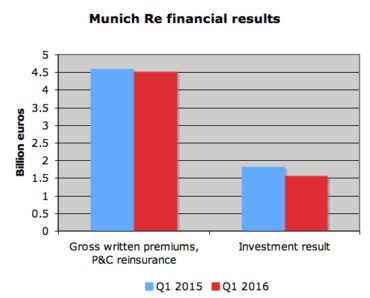 “As the claims notifications again remained appreciably below the expected level, we made reserve releases of around €250m in the first quarter, which is equivalent to 6.0 percentage points of the combined ratio,” Munich Re stated of its P&C reinsurance results. “We also still aim to set the amount of provisions for newly emerging claims at the very top end of the estimation range, so that profits from the release of a portion of these reserves are possible at a later stage.”

“If exchange rates had remained the same, premium volume for the first three months would have remained constant year on year,” Munich Re stated. “Prices remained under pressure, but to a slightly lesser degree than in previous years. Treaty terms and conditions were largely unchanged, as was the demand for reinsurance cover.”

Munich Re topped A.M. Best Company Inc.’s list of Top 50 global reinsurance groups, released in September, 2015. Those groups were ranked by total premiums written, including life, in 2014. Swiss Re, Hannover Re and Berkshire Hathaway ranked second, third and fourth respectively.

In the first three months of 2016, Munich Re reported May 10 that the largest man-made loss during the quarter was a 37-milion euro fire in a hydroelectric power station.

Company wide (including life and health and primary insurance), Munich Re reported gross written premiums of 12.511 billion euros in the latest quarter, down 4% from 13.038 billion euros in Q1 2015. 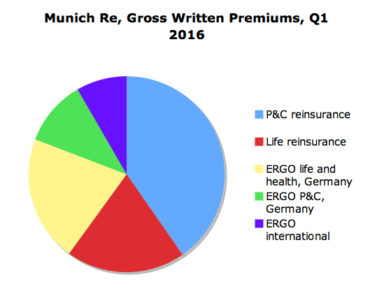 “During the renewals at 1 April 2016, pressure on prices, terms and conditions remained high,” Munich Re said of its reinsurance results.

Changes in the value of derivatives from the ERGO interest-rate hedging program “had a positive impact” of 267 million euros during Q1, Munich Re reported, but the “balance of gains and losses on disposals excluding derivatives was down significantly”  to 218 million euros.

That was “a consequence” of lower gains realized on fixed-interest securities and equities, “and to losses on the disposal of high-yield corporate bonds,” Munich Re said of its Q1 2016 investment result. The firm “posted higher net year-on-year write-downs of 219 million euros on non-derivative investments during the past quarter, mainly in its equity portfolio.”