The owner of a commercial building damaged by fire that started in a restaurant kitchen is precluded from pursuing a subrogated claim against the restaurant operator due to a clause in the lease requiring the landlord to buy fire insurance, an Ontario judge ruled in a decision released Wednesday. 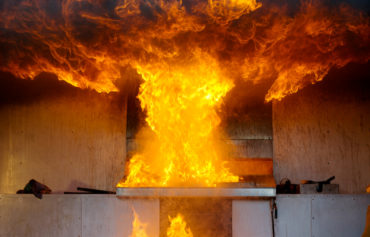 On Oct 22, 2011 a fire occurred at a Thunder Bay building from which Royal Host GP Inc. operates a Travelodge Hotel. Through a numbered company, three people – Mao Hui Zhang, Tian Xing Yang and Dong Jiang – operated the Sushi Station restaurant. The fire broke out in the kitchen of the Sushi Station, operated by 1842259 Ontario Ltd.

Through its insurer, Royal Host started a subrogated action “seeking recovery of damages from the defendants based on allegations that they caused the fire through their negligence,” wrote Justice Marc Garson of the Ontario Superior Court of Justice. The defendants denied responsibility for the fire and argued that the landlord was barred from pursuing a subrogated claim.

In his ruling released July 5, 2017, Justice Garson agreed. He cited both the terms of the lease and a trilogy of Supreme Court of Canada rulings released during the 1970s.

The lease agreement between Royal Host and 1842259 Ontario stipulated:

“The Landlord shall take out and maintain to the full replacement value, fire and other hazard insurance, as the Landlord in its sole discretion may deem advisable, on the building, excluding any property thereon with respect to which the Tenant or any other tenants are obliged to insure, and its own general liability insurance, including general liability insurance in respect of the Common Areas in the amount no less than $10.0 million in respect of any injury to or death of one or more persons and loss or damage to the property of others, the costs of which shall be included in the Common Expenses.  Notwithstanding the Landlord’s covenant containing this s. 7.02, notwithstanding any contribution by the Tenant to the cost of any policies of insurance carried by the Landlord …”

The plaintiff admitted that such wording “typically is sufficient to preclude the insurer from pursuing the tenant for damages, including those caused by the tenant’s own negligence” but also relied on the stipulation in the least that the tenant “expressly acknowledges and agrees” that the tenant “is not relieved of any liability arising from or contributed to by its acts, faults, negligence or omissions” and that “no insurable interest is conferred upon the Tenant under any policies of insurance carried by the Landlord.”

But the terms of that lease do not “expressly preserve the right of subrogation by the landlord’s insurer against the defendants,” Justice Garson ruled.

“As a general rule, courts have limited the subrogation rights of an insurer when a landlord covenants to pay for the insurance and agrees to look to its own insurer for any loss,” he wrote, citing three Supreme Court of Canada rulings: Pyrotech Products Ltd. vs. Ross Southward Tire Ltd., released in 1975; Smith vs. T. Eaton Co., released in 1977; and Cummer-Yonge Investments Ltd. v. Agnew-Surpass Shoe Stores Ltd.

Agnew-Surpass was a tenant in a shopping centre owned by Cummer-Yonge Investments. A fire – allegedly caused by negligence on the part of Agnew-Surpass – originated at the shoe store. The landlord pursued a subrogated claim of $208,648 for the building plus $25,105 for loss of rentals. The subrogated claim was initially dismissed, then allowed by the Court of Appeal for Ontario.  On appeal, three Supreme Court of Canada judges dismissed the claim in its entirety, four found Agnew-Surpass liable for loss of rentals but not for the building while another two agreed with the Court of Appeal for Ontario. The majority found that when provisions of the lease agreement were “read together, they force the conclusion that the lessee is to have the benefit of fire insurance to be effected by the lessor in respect of loss or damage arising from the lessee’s negligence.”

The Eaton case arose from a fire in 1966 at a department store in Barrie, where T. Eaton Company Limited had one lease each with two building owners, Albert Smith and Reginald Tuck. One insurer paid $110,400 to one landlord while the other landlord collected $35,000. The landlords pursued a subrogated claim. In a divided ruling, the Supreme Court of Canada ruled in favour of Eatons.

“This is not a case where one has to consider whether there is some provision exonerating one contracting party from liability to the other for the former’s negligence,” wrote Bora Laskin, then Chief Justice of Canada, for the majority in Eaton. “Rather is it a case where a supervening covenant has been given and taken to cover by an insurance policy the risk of loss from a fire caused by negligence. An insurer could not refuse to pay a claim for loss by fire merely because the fire arose from the insured’s negligence. I can see no reason why its position can be any better against a tenant, whose negligence caused loss by fire, if the lease with the landlord makes it clear that a policy was to be taken out by the landlord to cover such fires, and a policy is written which does so.”

A landlord’s agreement to insure “is for the benefit of the tenant,” Justice Garson wrote in 2017 in Royal Host v. 1842259 Ont. Ltd. ‘The landlord has agreed to insure for fire loss and the tenant is obliged to pay the associated costs.”