Commercial premiums down 15% for AIG 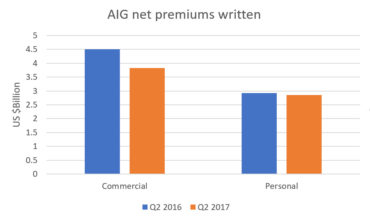 In commercial insurance, New York City-based AIG recorded net premiums written of $3.83 billion in the second quarter of this year, down 15% from $4.5 billion in the same period of 2016. All figures are in United States dollars.

The decrease was “9% on a constant dollar basis excluding divestitures,” AIG said in a release. “The decrease was related to continued execution on our strategic portfolio actions throughout the second quarter of 2017 and challenging market conditions.”

“While market conditions remain challenging, we are committed to disciplined underwriting and are focused on investing in profitable growth,” stated AIG CEO Brian Duperreault in a release.

Duperreault, who assumed his role May 14, replaced Peter Hancock, whose resignation was announced in March. Hancock had taken over as AIG CEO in December, 2014 – four years after joining the firm.

Hancock was appointed CEO of AIG property casualty in March 2011, after being  executive vice president of finance, risk and investments.

Hancock’s predecessor as AIG CEO was Robert Benmosche, a former MetLife CEO who joined AIG in 2009, after the U.S. government took a majority interest in AIG, which it has since sold. Benmosche died Feb. 27, 2015 of lung cancer.

After the collapse of the U.S. subprime housing market, in 2008, AIG encountered losses on its mortgage-related investments. At the time, AIG was the largest issuer of fixed annuities in the U.S. and was bailed out by the Federal Reserve Bank of New York.

On the property & casualty side of the business, AIG reported $3.386 billion in prior year development in commercial P&C, in the United States and Canada, in 2015. 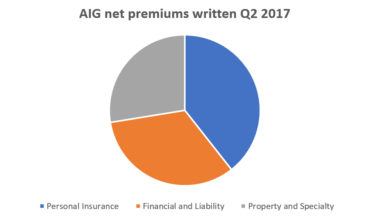 NICO has agreed to reinsure 80% of losses on certain reserves for accident years 2015 and prior.

“Prior year reserve development is net of the losses ceded to the NICO adverse development coverage (ADC) reinsurance agreement and the amortization of the deferred gain of the ADC cover,” AIG said Aug. 2, 2017.

Of the $3.83 billion in net premiums written in commercial in Q2 2017, $2.085 billion was in liability and financial lines while $1.74 billion was in property and special risks.