Communities in southwestern Ontario beginning to dry up after floods

WINDSOR, Ont. – Days after floods ripped through the southwestern Ontario city of Windsor and the neighbouring town of Tecumseh, residents are starting to pick up the pieces. 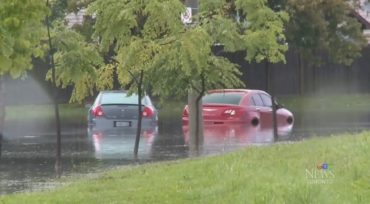 Environment Canada said rain was pouring down in the communities from Wednesday night through Friday, and the mayors of both cities declared states of emergency.

The rain has since cleared up, but the consequences are lasting.

Onorio Colucci, Windsor’s chief administrative officer, said that his city got nearly 2,000 calls from residents reporting flooded basements and Tecumseh got about the same.

This was an epicentre of the flooding here at Tecumseh Mall. Water has totally receded now, but lots of debris left. pic.twitter.com/QLgh8TN6ro

He says many people have insurance, but those who don’t may be left paying for repairs out of pocket.

But he says that if provincial officials label the communities a “disaster zone”, they may be eligible for provincial grants.

Colucci also says the city is working on mobilizing teams of volunteers to help people clean out their wrecked basements.

I'm in Tecumseh where homeowners are still cleaning up as much as 24 inches of water in their basement @CityNews pic.twitter.com/qCOcACID3n

Residents in Tecumseh are wading through their basements this morning. Water is apparently almost waist deep in some places. #ONStorm pic.twitter.com/ijwWXV02AM

Cleanup continues for victims of flooding in Windsor and Tecumseh. #windsorflood pic.twitter.com/x92Rm18YnO

Edge of the flood. Nothing left here at Tecumseh Mall but soggy grass and a debris line. #onflood pic.twitter.com/Va9CjQDp5D

Flooding pictures from hubby on business in #Windsor. Likely not much business going on today! These from Tecumseh Mall(Sept29) pic.twitter.com/3ndhWE5pQu

Customers affected by flooding in Windsor/Tecumseh can get information about coverage and other support at 1-866-454-8910 #windsorflood pic.twitter.com/ZvFrZJfBXD