The continued consolidation in both the insurance broker and carrier spaces in Canada could create an absence of mid-sized players, a speaker suggested on Wednesday at KPMG’s 25th Annual Insurance Conference in Toronto. 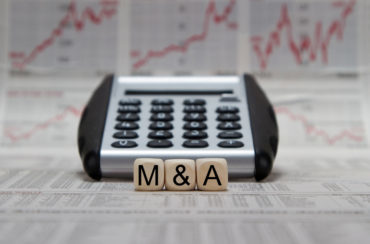 “You could see a creation of an absence of mid-sized players, where there is a move to smaller, regional niche players and more on the larger players,” said Georges Pigeon, partner, deal advisory, with KPMG in Canada. “Now whether in the P&C carrier space we are going to see a development of larger players as it continues to consolidate and some of the smaller, niche/regional players and the middle will empty itself, it’s still to see.”

Pigeon was a panel member of the Trends in P&C session at the conference, held at the Metro Toronto Convention Centre. Moderated by Pierre Lepage, partner and business leader, property and casualty actuarial with KPMG in Canada, the panel also featured Joel Baker, president and CEO at MSA Research Inc. and Houston Cheng, consulting actuary and senior manager at KPMG.

Pigeon discussed merger and acquisition trends related to the P&C, life and distribution channels, focusing on five expected “drivers and catalysts” for M&A activity in Canada in the coming year:

“Here I would like to be careful,” Pigeon cautioned in relation to insurtech, or the application of technology in insurance. “Because having gone through the Internet bubble of the early 2000s, some would argue that maybe we are living through another bubble.” 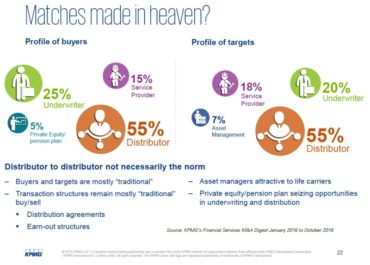 He pointed to some of the fintech data that has come out recently that has shown a slowdown in funding of fintech. “It doesn’t mean that the market is going to disappear. I think it will just morph into the more reliable or more solid players will continue,” he suggested. “I’m not saying either that the money is coming out of the market, there is also some repositioning there.”

One recurring theme in the P&C space over the past 10 to 12 years has been one notable or sizable transaction per year, Pigeon continued. For this year, he pointed to the January transaction whereby Aviva acquired RBC General Insurance’s business “and turned it into a 15-year distribution agreement.”

Another major M&A trend – besides entering a new geographic market; new products; new services; or equipping operations with new tools – is accessing new distribution channels. “This one is going to be a recurring theme… over the next few years,” Pigeon suggested. “We hear about all the transactions happening with brokers and agents. That’s a key one to get new customers and also to get into new markets and obviously capture new customers.”

Looking forward, Pigeon’s perspective is that the fourth quarter of 2016 “should be another good one” in terms of M&A activity. “I would believe that, in the coming year, there is going to be even more.”