Contractor immune from liability in botched demolition of burning building

A trucking and excavation company in Nova Scotia is immune from tort liability because it was acting under orders from the local fire department in a botched attempt to demolish a burning building, a Nova Scotia court has ruled. 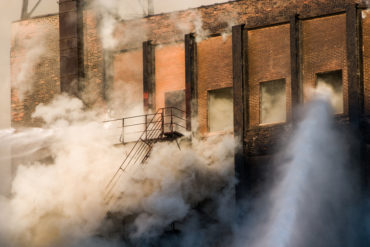 The case concerns a fire in Amherst, Nova Scotia that started in August in an adjacent building to Walmer Inc. The Amherst Fire Department (AFD) fought the fire through the night and into the next day. On the morning of the second day of the fire, the AFD’s deputy chief contracted Baxter Trucking Limited to demolish the burning building while AFD continued firefighting operations.

During demolition operations, sections of the burning building twice collapsed into the adjacent building, owned by Walmer Inc. and insured by Intact Insurance.

Intact subrogated the claim by Walmer, seeking damages from Baxter Trucking and Doug Richard, the truck driver and excavator operator, for damage to its client’s building.

Section 297(5) of Nova Scotia’s Municipal Governance Act gives immunity from liability to those acting under the authority of the fire services chief.

In a decision released Monday, the court disagreed. “Baxter Trucking and Doug Richard were assisting the deputy chief of the AFD (who was an officer in charge) in his efforts to extinguish the fire and keep it from spreading, thereby protecting the public,” the court found. “The deputy chief provided the directions and instructions to knock down the wall.”

The problem was that the attachment would have taken eight hours to install. The fire chief did not want the fire to spread during that time; he therefore requested Baxter to go ahead without the extension attachment because time was of the essence.

The fact that Baxter proceeded as requested by the fire chief demonstrated the fire department’s authority over the actions of the contractor, the court observed.

“Here, Baxter Trucking and Doug Richard were not weighing the costs and benefits of proceeding with the demolition of the [burning] building,” the court found. “From the agreed statement of facts, it appears that Baxter Trucking may have done things differently if they were making the decisions. They may have put on the extension attachment to have more control over the demolition.”