VANCOUVER – A spokesman for British Columbia’s wildfire service says crews accidentally sparked a blaze while burning off fuel in order to contain one of many fires raging across the province’s Interior. 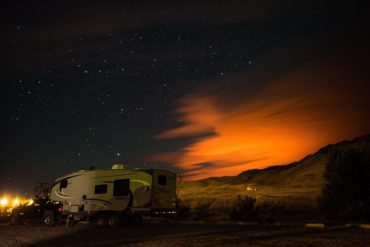 A trailer parked at a campground in Savona, B.C., is seen as the Elephant Hill wildfire burns in the distance near Clinton, illuminating smoke in the sky during the early morning hours of Sunday July 30, 2017. An evacuation order was issued late Saturday for the Village of Clinton due to increased fire behaviour. There are currently 151 wildfires burning and according to the B.C. Wildfire service more than 4,200 square kilometres have burned since April 1. THE CANADIAN PRESS/Darryl Dyck

Kevin Skrepnek says embers ignited a nearby hillside as part of a controlled burn Tuesday against the 840-square-kilometre Elephant Hill fire, about 80 kilometres west of Kamloops.

He says he doesn’t know the exact size of the unintentional blaze but firefighters were still working to put it out as of Wednesday afternoon.

Skrepnek says the controlled burn was successful in depriving the main fire of fuel.

He says controlled burns are an essential and effective tool for fighting wildfires and that while accidents do happen the vast majority of planned burns are successful.

“We’ve been doing this on many fires across the province up until this point,” Skrepnek said during a daily wildfire update conference call.

“The fact of the matter is that when fires get to this size, the use of controlled ignitions is one of the best tactics that we have in terms of trying to contain them. Unfortunately, in this instance the winds just weren’t in our favour.”

About 500 of the 3,300 people working for the BC Wildfire Service have been assigned to the Elephant Hill blaze, in addition to 22 helicopters and 66 pieces of heavy machinery.

Meanwhile, a new evacuation order was issued Wednesday for areas south and west of Clinton.

The Thompson-Nicola Regional District says a rapidly moving wildfire continues to threaten properties in the area and has told affected residents to head to Kamloops and register with the Red Cross.

An estimated 120 homes are covered by the latest order in an area that has already seen at least four evacuation orders since late last week.

Also on Wednesday evening, the Cariboo Regional District expanded an evacuation order for the Kluskus, Blackwater and Clisbako Nazko area about 100 kilometres west of Quesnel.

The district also said residents can now return to portions of the Wildwood area near Williams Lake, with a caution that wildfire activity continues in the area, air quality remains poor, and the area is still on evacuation alert.

There were 132 fires burning across B.C. as of Wednesday, 10 of which were added since Tuesday.

More than 850 fires have consumed 4,730 square kilometres of land since April 1, when the fire season officially began.

Conditions were expected to worsen in the coming days as southern B.C. faces a heat wave.

“Temperatures are going to be in the 30s and above in the southern part of the province and the Cariboo with that relatively low humidity, so still quite dry and still unfortunately no significant rain in sight for southern B.C.,” Skrepnek said.

Robert Turner of Emergency Management BC said more than 35,000 evacuees had registered as of Wednesday, including 10,000 in Prince George, more than 9,000 in Kamloops, and 5,000 in southwestern B.C.

Turner commended the work of the many volunteers who have donated their time and energy to help people affected by the wildfires.