A B.C. court has found that a design-build contractor and an architectural and engineering firm are both entitled to coverage under a Lloyd’s Underwriters policy that included a broad provision to insure “any firm(s)” providing “professional services” to a B.C. hospital parkade project. 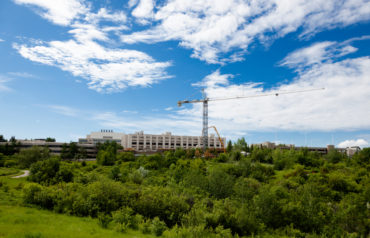 Lloyd’s argued before court that this broad provision, Clause 3, was included in the policy by accident. The insurer said a different clause of the policy, Clause 5, should have been the operative wording for identifying the policy’s named insureds.

Clause 5 required named insureds to be reported to – and “accepted by” – the insurer. Since neither Surespan Structures Ltd. (the design-build firm) nor HGS Limited (the architectural and engineering firm) provided the details required by Clause 5, and neither were “accepted by the insurer,” they should be excluded from coverage, Lloyd’s argued.

The Supreme Court of British Columbia rejected Lloyd’s contention that the more general provision should be ignored in favour of the more specific clause in the policy.

“I am satisfied that when reading the policy as a whole, the meaning of insured is clear and unambiguous in the circumstances presented here,” Supreme Court of B.C. Justice Janet Winteringham wrote for the court in Surespan Structures Ltd. v Lloyd’s Underwriters. “I decline [Lloyd’s] invitation to simply ignore Clause 3 in the interpretative exercise. Based on the materials before me, it is my view that to do so would have the court use the surrounding circumstances to ‘deviate from the text such that the court effectively creates a new agreement.”’

Vancouver Island Health Authority entered into an agreement with THP Partnership (Project Co.) in 2014 to design and build two hospitals, including parkades in Campbell River and Comox, B.C. Lloyd’s issued its policy for the project effective June 25, 2014 through Sept. 30, 2018. The policy has a $10-million limit on liability.

Project Co. notified the Surespan and HGS Limited in late 2016 that cracks had formed in both parkades. The two subcontractors petitioned the court to confirm that they were insureds under the Lloyd’s policy. (The court decision does not determine coverage generally, or fault for any alleged parkade defects.)

Surespan and HGS Limited argued they were named insureds on the policy based on Clause 3, which states that a named insured includes: “Any other firm(s) which have or will provide professional services in regard to the project.”

Lloyd’s argued that Surespan and HGS Limited were not named insureds in the policy, based on Clause 5, which states that a named insured includes: “Any other firm(s) which have or will provide professional services in regard to the project provided that such additional firms are reported and accepted by the insurer along with details of the professional services to be provided, the date on which the firm is to commence the provision of services, and their professional fees.”