Are you covered for giant boulder damage? Not if the Earth moves…

Residents in certain parts of British Columbia may be used to evacuations from wildfires, but how about evacuations due to giant boulders? 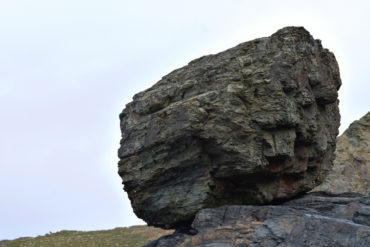 The Canadian Press reported earlier this week that eight properties in the province’s Fraser Valley, including five homes, were evacuated last month over concerns about the stability of a massive boulder that slid down into a residential community last month.

The “unexpected large boulder,” weighing approximately 50,000 pounds (22,000 kilograms), rolled down some rock bluffs to a residential area on Rockwell Drive in the District of Kent.

Things were so dicey that Mayor John Van Laerhoven declared an emergency evacuation order effective immediately for certain properties, although there was no word on why the order came nearly one month after the boulder rolled into town on Nov. 5.

“Life safety is paramount for our citizens living in this area and the evacuation order is an extra precautionary step to address a potentially serious situation with freezing weather in the higher elevations,” the mayor said in a statement. He has also asked the “public to cooperate” and limit their travels to the affected area of Rockwell Drive.

While the boulder remains, the district is working with Emergency Management British Columbia to complete a geotechnical assessment on the rock bluffs “as soon as possible.”

In the unlikely event that a boulder comes rolling into your home, is it covered by insurance?

Law firm Rivkin Radler reported last year that a policy’s “earth movement exclusion” precluded coverage for a claim involving a boulder that fell down a hill and damaged an insured cabin.

The case involved a large boulder that dislodged from a hillside several hundred feet from a vacation cabin near Sheridan, Montana. It then rolled down the hill into the unoccupied structure and caused significant damage. The owner submitted a claim to his insurer, which found the claim was excluded by the policy’s “earth movement exclusion.”

A trial court granted a judgement in favour of the insurer. The dispute reached the Montana Supreme Court, which affirmed the earlier ruling.

The higher court reasoned that the term “earth” included more than just soil such as that found in a garden. In the court’s view, “reasonable people would recognize that rocks of all sizes ordinarily comprise more or less of the surface of the earth upon which we live.” Therefore, it determined, construing the policy to exclude only damages caused solely by soil movement “would improperly distort the policy language.”

Finding nothing in the exclusion’s language to indicate that there was any basis for separating rock from soil when considering “earth movement,” the court concluded that the “clear intent” of the policy language was to “broadly exclude coverage for any and all types of earth movement.”