Crews in B.C. preparing bridges for safety in anticipation of second snowfall

British Columbia’s Ministry of Transportation and Infrastructure is advising drivers in Metro Vancouver that “work is well underway” to prepare the Alex Fraser and Port Mann bridges for a snowfall expected later Thursday. 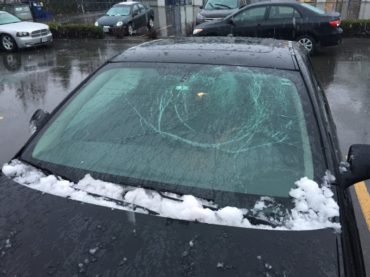 The Canadian Press is reporting that the Insurance Corporation of British Columbia has received at least 40 claims from drivers whose vehicles were damaged. Photo: @DerekBThorp.

On Tuesday, the Canadian Press reported that transportation minister Todd Stone said that “more needs to be done” to prevent chunks of ice from falling from Metro Vancouver’s bridges and damaging vehicles. A winter storm brought more than five centimetres of snow to the region Monday, with the Insurance Corporation of British Columbia receiving at least 40 claims from drivers whose vehicles were damaged, according to the Canadian Press. Ten claims were from drivers travelling over the Port Mann bridge between Surrey and Coquitlam, while 30 claims came from motorists going over the Alex Fraser bridge, which spans New Westminster and Delta.

Patrick Livolski, the Ministry of Transportation and Infrastructure’s assistant deputy minister and professional engineer, said in a press release on Tuesday that the ministry is looking into these reports and that they “encourage any drivers who may have experienced damage to contact the ministry so that we can determine how it might have happened. We have been in touch with one driver who had windshield damage while crossing the Alex Fraser and we are working with the individual now. We will continue to actively investigate these reports and we will use this information to identify any improvements that can be made for the future.”

The ministry said in a separate statement on Thursday that the ministry and TI Corp. have brought in “additional” crews to the Metro Vancouver area “to fully prepare the bridges for safe travel.” Crews have applied anti-icing solution on the crossbeams of the Alex Fraser bridge’s towers, and will repeat this application throughout the day and evening, the minister reported. The anti-icing fluid will reduce the chance that ice and snow will build up on the crossbeams overhead.

As crews work to ensure the safest possible conditions for those driving over the Alex Fraser bridge, travellers are advised that temporary lane closures may have to go into effect. “This would occur if heavy and wet snow accumulates on the bridge cables and ministry staff feel it could damage cars travelling on the outside lanes,” the statement said. Crews will be closely monitoring the bridge throughout the day and evening, and if conditions get too severe, they may temporarily close the bridge for safety reasons.

The statement noted that Port Mann bridge has a snow-removing system, what the ministry is calling the “only system of its kind in the world,” which involves chain link collars fitted to each one of the bridge’s 288 cables. Collars are dropped one at a time to dislodge snow accumulation. As well, cable sweepers have been installed to clear snow from cables before ice has the chance to form, limiting the size of ice that can accumulate on the bridge’s cables and reducing the chance of damage to vehicles.

In preparation for Thursday afternoon’s anticipated snowfall on the Port Mann bridge, the ministry’s snow and ice technicians have been working to reload the collars from the bottom of the cables after Monday’s snowfall. As snow collects on the cables, crews will be conducting frequent collar drops throughout the day and evening to clear any snow.

Motorists are also encouraged to check DriveBC, which will be regularly updated with information.