COLE HARBOUR, N.S. – Fire flared up again near a popular hiking trail in Cole Harbour, N.S., as crews continued to try to put out hotspots and quench the remnants of a large blaze that forced the evacuation of dozens of people.

Deputy fire Chief Roy Hollett said there were several flare-ups early Monday that came within roughly 400 metres of homes near the Salt Marsh Trail about a half hour outside Halifax. 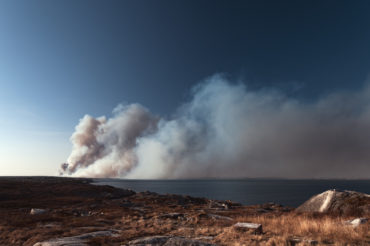 The fire, which was originally reported at about 4:15 p.m. Sunday, had become dormant overnight but sparked up again. Hollett said the fire came within about 100 metres of homes Sunday, prompting an initial evacuation.

Between 10 and 20 homes in the area on Astral Drive were still under a mandatory evacuation order that originally applied to roughly 85 homes, though it was lifted for most of them by about 9 p.m. Sunday.

“It’s our comfort level now just to have that mandatory evacuation for those homes in the event that the fire takes a change so we don’t have to worry about evacuating people and it’s just safer for crews to be able to move around,” he said at the site of the fire as a helicopter arrived overhead to begin dousing the flames from the sky.

“It was moving considerably yesterday as the winds were really pushing it.”

The wind was gusting to about 25 kilometres an hour Monday, with temperatures hovering at around 15 C.

It’s estimated that the fire covered an area of about 20 hectares of forested land that was littered with brush from previous storms, making it harder to both access and to fight. Hollett said a lack of snow this winter also left little precipitation in the ground.

Hollett said there were about three fire crews on the ground dealing with hotspots and digging to see if there were fires under the growth.

“It’s quite labour intensive,” he said. “We had drones up in the air yesterday and could see the fire crowning, which means it was moving up the trees and from treetop to treetop. When that happens that’s an indication the fire is moving quick and intense.”

Because the fire was deep inside the woods, crews had to haul hoses about three kilometres before being able to fight sections of the blaze.

It wasn’t yet clear what may have started the fire. Department of Natural Resources personnel were also on site.

Fire officials say some residents may still need to be evacuated again at a moment’s notice if the fire changes direction.

Cole Harbour Place has been opened to people forced from their homes by the fire.