RENO, Nev. – Firefighters in Nevada were hoping to stop a wind-driven wildfire, which has already destroyed 22 homes north of Carson City, from jumping any major roads Saturday. 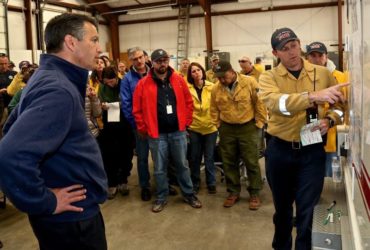 The blaze between Reno and Carson City was only 5 per cent contained, fire officials said.

The fire, which grew overnight to more than 5 square miles, was threatening 500 structures and had destroyed 17 outbuildings.

Residents east of Washoe Lake have been allowed to return home. Other neighbourhoods have been permitted but told they might have to evacuate again during the weekend. Homes west of the lake will remain under evacuation.

Gov. Brian Sandoval declared a state of emergency Friday to free up resources. Approximately 855 personnel were working on the wildfire. Other resources that have been added in the last day include seven air tankers and 155 engines, according to the Sierra Front Interagency Fire Dispatch Center.

Rain helped moderate fire activity, but strong winds have been forecast for later in the day and into Sunday.

The so-called Little Valley fire was first reported shortly after 1:30 a.m. Friday in the mountains between Lake Tahoe and Washoe Valley about 8 miles north of Carson City. It spread rapidly thanks to winds gusting at more than 70 mph.

The cause is still under investigation.

The fire was one of three that broke out along the Sierra Nevada on Friday. A wildfire that prompted the evacuation of 500 homes on the south end of Lake Tahoe was estimated to be 80 per cent contained Saturday, according to CAL Fire. That fire has burned about 210 acres and forced the closure of part of California Highway 89. The mandatory evacuation orders will remain in effect throughout the night because heavy rain and high winds were impeding hazard clean up, according to Sgt. Tasha Thompson with the El Dorado County Sheriff’s Office.

Firefighters also snuffed out another fire that destroyed at least one structure and had temporarily closed the Mount Rose Highway connecting Reno to Lake Tahoe.

Evacuating from the base of the #CarsonCity #Fire @CassieWilsonWX #Reno #nevada pic.twitter.com/BQgmeDlXXC

Chief Moore thanks the Great Basin Incident Management team for the incredible response and support to our community.#LittleValleyFire pic.twitter.com/EtmfMZbK70

A few more photos of the damage this #LittleValleyFire caused yesterday. PC: @DennisHof. I'll have full details on @KRNV at 11 pic.twitter.com/kaz1jToJ1U