The increased security threat from cyber and data privacy breaches is the number one risk on the minds of executives in the global transportation industry, according to a new report released on Monday by Willis Towers Watson (WTW).

Willis Towers Watson’s 2016 Transportation Risk Index was commissioned to measure the industry’s current risk environment from the perspective of 350 senior executives in the air, land and sea sectors. Interviews gauged the respondents’ perceptions of risk in relation to five megatrends: geopolitical instability and regulatory uncertainty; digital vulnerability and rapid technological advancement; changing market dynamics and business model insecurity; complex operating models in an interconnected world; and talent management and the complexities of a global workforce. 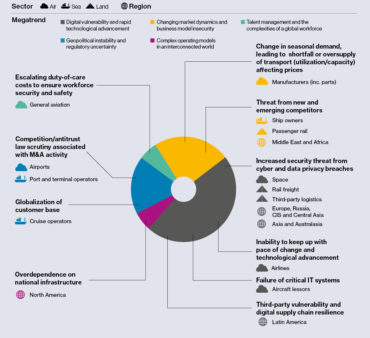 The demographic profile of respondents was evenly divided between North America; South America; Europe, Russia, the Commonwealth of Independent States and Central Asia; Asia and Australasia; and the Middle East and Africa, with each region representing 20% of respondents.

“The single biggest individual threat across all modes of transport is the potential for cyber and data privacy breaches,” said a press release from WTW, a global advisory, broking and solutions company. “There is no denying that the skillsets of the digital threat actors are growing, just as the transportation industry’s increased reliance on third parties is multiplying the potential points of entry.”

Respondents, which included 110 CEOs and 80 chief financial officers, were asked to rate 50 specific risks for their severity of impact and ease of risk management over a 10-year horizon and the five broad categories, or megatrends. The geopolitical megatrend is the highest-rated category of risk, highlighting the impact of world events on operations and, ultimately, corporate profitability, WTW explained in the release. The actions of government, regulators and the judiciary – often taken in response to those events – were found to have a similar potential to be disruptive. 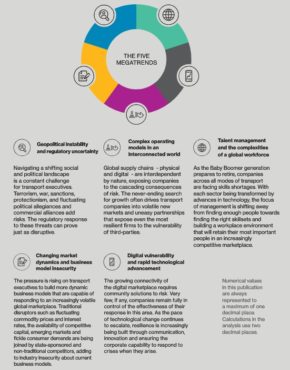 Rating the megatrends by region, the geopolitical instability and regulatory uncertainty megatrend was cited by 48% of North American respondents, followed by digital vulnerability and rapid technological advancement (44.3%), changing market dynamics and business model insecurity (37%), complex operating models in an interconnected world (29.2%) and talent management and the complexities of a global workforce (27%). Rank order was determined by combined risk score (severity of impact x ease of risk management).

The index revealed that as supply chains – both digital and physical – become more connected, there is a growing recognition that risk resilience needs to be built at the community level. “No company, no matter how diligent, is an island any longer,” WTW said in the release.

In some cases, the research identified common fears. For example, half of the top 10 individual risks are from the ‘digital’ megatrend. The hazards of complex operating models in an increasingly connected business environment also rate highly; depend­ence on third party suppliers and their potential to be the weak link in the digital supply chain both feature in the top 10 risks when responses from all modes of transport are aggregated. 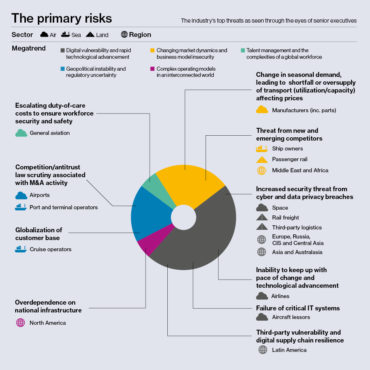 However, stark differences in the perception of risk arise just as frequently as common themes. For example, four of the five regions surveyed perceive different primary risks, reflecting the importance of developing local solutions, WTW said. “Understanding your risks and knowing how to respond provides a competitive advan­tage, which is why we believe risk is a path to growth,” said Mark Hue Williams, head of transportation industry for WTW, in the release.

Overall, the research findings revealed a fluid risk landscape that is increasingly complex and interconnected. While proactive risk mitigation strategies remain central to corporate resilience, preparedness and response are now just as critical to a company’s performance, WTW argued.

“The transportation world is rapidly evolving, so risk strategies need to be responsive and dynamic,” said Hue Williams. “Regulation and technological advances are demanding new opera­ting models while, simult­aneously, hostile actors are mounting attacks to take advant­age of the industry’s strategic role in the global economy. All of this is set against unstable geopoli­tical and economic backdrops and growing demand for new skills in the workplace. Knowing how these shifting forces should shape your risk strategy is critically important, and a great opportunity for those who lead the response.”