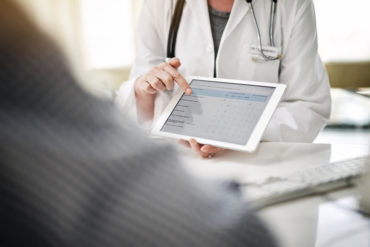 The ability to “identify emerging risks in areas such as cyber security,” is, for medical professional liability carriers, a “key aspect” of strong enterprise risk management, A.M. Best wrote in a segment review.

Direct premiums written for A.M. Best’s MPL composite were $7.283 billion in 2016, down 1.3% from $7.381 billion in 2015, A.M. Best noted in the report, Medical Professional Liability Sector: Solid results despite growing headwinds and deteriorating profitability. All figures are in U.S. currency.

“For the most part, cyber liability is not a retained risk, and is either provided directly by a third-party insurer or ceded 100% to another insurer that provides the underwriting and claims handling expertise in this area,” A.M. Best said in the report.

On this side of the border, healthcare privacy breaches have included a 2013 incident in which an employee of Hôpital Montfort in Ottawa lost a USB memory stick containing unencrypted records of 25,692 patients.

As of early 2015, the “most notorious case on privacy in Canada” involved a film shoot in Toronto in 2005, insurance defence lawyer Catherine Korte said during a presentation at the time.

Ontario’s privacy commissioner found that a medical testing clinic and a paper disposal company were both in violation of Ontario’s Personal Health Information Protection Act (PHIPA). The clinic had sent unshredded papers to the disposal company. Instead of being shredded, those documents changed hands several times and ended up being used as props in a film shot in Toronto.

“So what happened was they had medical information blowing down the streets of Toronto, being the medical records of identifiable individuals,” Korte, a partner with McCague Borlack LLP, said in 2015 during a presentation at the Ontario Insurance Adjusters Association (OIAA) professional development and claims conference. “So you had the police force out, they had hundreds of thousands of people rounding up documents to get the medical records of people off the streets of Toronto.”

Cyber liability “will be with” the healthcare sector “for a long time,” A.M. Best said May 10, 2017 in its segment review on U.S. medical professional liability insurers. “Those companies that retain some or all of the risk, or write the coverage as part of or as an addendum to their own policy, need to ensure that their exposure is limited through strong policy language and through the use of highly rated reinsurers.”

In addition to cyber security, other emerging risks include new procedures, equipment and medicines, as well as telemedicine, and “the use of physician extenders or nurse practitioners to perform duties traditionally performed by doctors,” A.M. Best said.

Some medical liability insurers “are judiciously offering broadened coverage, to fill a void in coverage for these medical professionals, thereby protection them and the insured physicians for whom they work,” A.M. Best added.

Another trend affecting the sector is tort reform in the U.S., A.M. Best noted.

In Tennessee, for example, state lawmakers are considering legislation that would replace the medical malpractice system “with a no-blame model similar to workers compensation,” A.M. Best noted. “Patients who are injured by a physician would file a claim before a panel of experts and an administrative law judge.”

Elsewhere in the U.S. some states “have enacted some variation of a cap on non-economic damages,” A.M. Best reported but added several states ruled those caps are unconstitutional.

“Those in favor of medical professional liability tort reform assert that without it, physicians are forced to practice defensive medicine,” A.M. Best stated. “Those opposing tort reform argue that it deprives medical malpractice victims of their right to recourse. In addition, some claim that a jury’s award of non-economic damages should not be reduced to an amount determined by legislators and that a limit on non-economic damages limits the amount a plaintiff can recover for intangible injuries.”

In Canada, non-pecuniary damage awards have been an issue in negligence lawsuits against medical doctors.

For example, Dr. Gerald Korn, an obstetrician and gynaecologist, was sued by Kobe ter Neuzen, who became infected in January, 1985 with Human Immunodeficiency Virus (HIV) after undergoing artificial insemination. Court records indicate that Dr. Korn did not become aware until July of 1985 that the HIV virus could be transmitted by artificial insemination. Ter Neuzen sued and was awarded $883,800 – including $460,000 for non-pecuniary damages – by a jury in British Columbia. That verdict was set aside in 1993 by the B.C. Court of Appeal, which ordered a new trial on the issue of liability as well as damages. That ruling was upheld by the Supreme Court of Canada in a decision published in 1995.

A question before Canada’s highest court was whether the B.C. Court of Appeal was wrong in ruling that a “rough upper limit” on non-pecuniary damages – established by the Supreme Court of Canada in 1978 in Andrews v. Grand & Toy Alberta Ltd. – applied in ter Neuzen’s lawsuit against Dr. Korn.

“The trial judge should instruct the jury as to an upper limit, if, after considering the submissions of counsel, he or she is of the opinion that the damages by reason of the type of injury sustained might very well be assessed in the range of or exceeding the upper limit,” wrote Justice John Sopinka on behalf of the majority of Supreme Court of Canada judges hearing ter Neuzen’s appeal. “The instructions may include an explanation of the reason for the cap.”

The Andrews v. Grand & Toy Alberta Ltd. decision arose from a motor vehicle accident in 1972 in Edmonton. Robert Anderson was driving a panel van owned by Grand & Toy. James Andrews was driving a motorcycle with a passenger. The motorcycle passed the van on the right when the accident occurred.

A trial judge awarded Andrews $1.02 million. That included, among other things, $736,000 in cost of future care and $150,000 in pain and suffering. The pain and suffering award was reduced to $100,000 on appeal. That finding was upheld by the Supreme Court of Canada in its ruling released in 1978.

“The monetary evaluation of non-pecuniary losses is a philosophical and policy exercise more than a legal or logical one,” wrote Mr. Justice Brian Dickson, who was later appointed Chief Justice of Canada. “The award must be fair and reasonable, fairness being gauged by earlier decisions; but the award must also of necessity be arbitrary or conventional.”

Justice Dickson added that in assessing of damages for non-pecuniary losses, “the social burden of large awards deserves considerable weight.”

Andrews, 21 at the time, suffered a fracture with dislocation of the cervical spine, which caused him to use the use of his legs, trunk, his left arm and most of his right arm.

Non-pecuniary damages of $100,000 is “an appropriate award” in cases such as Andrews, Justice Dickson wrote in 1978, adding that amount “should be regarded as an upper limit of non-pecuniary loss,” in cases of that nature, “save in exceptional circumstances.”

There is “no objective yardstick for translating non-pecuniary losses, such as pain and suffering and loss of amenities, into monetary terms,” Justice Dickson added. “This area is open to widely extravagant claims. It is in this area that awards in the United States have soared to dramatically high levels in recent years. Statistically, it is the area where the danger of excessive burden of expense is greatest.”