Cyberattacks, autonomous vessels, Arctic exploration and a return to piracy are the top risks facing the shipping industry, new research from Lloyd’s has found. 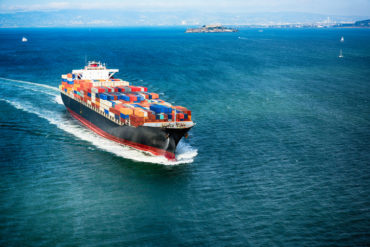 With insight and input from marine insurance experts across the Lloyd’s market, the world’s specialist insurance market explored the top risks in shipping today, presented in no particular order of priority. Forming the backbone of the global economy, 90% of world trade is still carried by the shipping industry, Lloyd’s reported.

“Agents of instability such as seaborne cyber attackers and other pirates threaten lives and to disrupt the flow of international trade and commerce,” Lloyd’s said in a statement on Tuesday. “If that weren’t enough, the shipping industry marches towards automated shipping with all the complexity that it entails. And ship captains are expanding the frontiers of risk as they venture further north in search of new navigable seaways. But who will be the first to suffer a casualty and pollute the pristine Arctic, with all the environmental damage and negative publicity that is likely to ensue?”

Neil Roberts, manager of marine and aviation at the Lloyd’s Market Association, calls the threat of a cyberattack “the new piracy and it is generating a lot of heat and noise at the moment, but very little light.” While operators are dependent on computers aboard their ships, one factor that provides a measure of resilience is the fact that many onboard computer systems are self-contained and not connected to the web, making it harder for would-be hackers to infect from the outside.

“Usually the threat comes from an insider or a disgruntled employee,” Roberts suggested. But sea captains aren’t completely immune to attacks from outside as an experiment in 2013 showed. A research team from the University of Texas successfully spoofed a ship’s GPS-based navigation system sending the 213-foot yacht hundreds of yards off course – without triggering any alarms.

Another top risk is the rise of autonomous vessels, which the shipping industry expects to widespread adoption of over the next few years. “We are working hard to understand what might happen with autonomous ships,” says Roberts. “The technology is moving faster than the regulations. And before that regulatory change happens it’s difficult to see autonomous ships taking off in a big way. At the moment, there must be a human master at sea.”

From an insurance perspective, he says, these risks aren’t particularly new. Remote underwater vehicles have been used for some time, Roberts says, in wreck diving, for example. “If you’re insuring an asset, then the asset is the same whether there’s a crew on board or not,” Roberts said in the statement. “The question is: does getting rid of the humans make it more or less safe? We know that there are many times when human intervention has led to collisions being avoided.”

As for Arctic exploration, Roberts says the polar regions are “increasingly opening up for tourism, exploration and operation,” calling it “the new frontier of risk. Within the Lloyd’s market there are specialist underwriters who will consider coverages for ships that specifically want to take Arctic sea routes,” he said. But the “salvage gap” remains a big concern for underwriters. “There are very few salvage options in the high north.”

The last top risk is piracy. The statement noted that around the turn of the decade, the coast of Somalia became notorious for the frequency of its pirate attacks. The conditions in this part of the world – which included severe political instability in a country that bordered one of the world’s busiest shipping lanes – led to a series of hijackings. In 2010, Somali pirates hijacked 49 ships and took over 1,000 hostages, according to the International Maritime Bureau, Lloyd’s reported.

“It was the focus of the world’s attention for some time,” Roberts said. “And in response ship owners got together and produced self-defence guides, some started hardening their ships with water cannons and others employed armed guards. In addition, a transit corridor was set and many countries contributed naval support. Many of the ships that did get attacked were deficient in at least one of these areas in some way.”

But it was enough to hold the situation, Roberts said. “Now that uneasy truce is gradually being eroded and there have been some close calls recently. Nobody knows what will happen when the naval support is withdrawn at the end of next year.”