Australia is experiencing its most powerful storm since 2011, as Cyclone Debbie roared ashore in Queensland, Australia as a Category 4 storm shortly after noon on Tuesday. 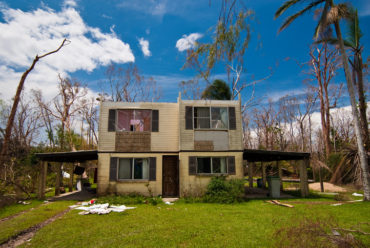 Catastrophe modelling firm AIR Worldwide said that Cyclone Debbie struck Airlie Beach as a Category 4 storm on the Australia Bureau of Meteorology intensity scale (similar to a Category 3 Atlantic hurricane), with wind gusts as high as 260 kilometres per hour and heavy rain. It was the most powerful storm to strike Australia since Cyclone Yasi destroyed Queensland resorts, homes, and crops in 2011, AIR said in a press release on Tuesday.

A large, slow-moving storm, Cyclone Debbie missed high tide by a couple of hours, sparing Bowen, Mackay and other coastal towns the high storm surge that had been predicted. The cyclone intensified quickly after reaching land and by the end of the day had been downgraded to a Category 2 cyclone on the intensity scale.

“Moving at a crawl over the warm waters of the Coral Sea, Cyclone Debbie had strengthened from a tropical low five days before landfall,” said Dr. Anna Trevino, senior scientist at AIR Worldwide, in the release. “Prior to reaching Queensland, Debbie tore through the popular tourist destination Whitsunday Islands, damaging resorts, beaches and boats. On Hamilton Island, a maximum sustained 1-minute wind speed of 220 km/h (136 mph) was recorded.”

Dr. Trevino noted that the cyclone was the first tropical cyclone of hurricane strength to affect Queensland since Tropical Cyclone Marcia in 2015. In late January this year, Dr. Trevino added, a record was set for the longest period without a hurricane-strength storm (74 mph or greater winds) in the three major Southern Hemisphere basins: 280 days.

Within hours of Cyclone Debbie landfall, the Insurance Council of Australia declared the storm a catastrophe, which can facilitate settling claims. Prior to landfall, Australian authorities urgently urged the tens of thousands of people in the path of the storm to evacuate, particularly residents and visitors in low-lying coastal areas at risk from the expected storm surge and from flash flooding. Coal mine operators in Cyclone Debbie’s projected path shut down, marine terminals and along the coast closed and the Townsville Airport suspended operations, AIR reported.

Cyclone Debbie’s powerful winds and heavy rain exacted the damage expected throughout the impacted coastal region: downed trees, damaged roofs and gutters, broken windows and boats ripped from moorings. Flooded streets have resulted in damage to vehicles as well as residential and commercial property, the catastrophe modelling firm said. Caravan (trailer) parks have reported substantial damage; power outages occurred in a number of areas from Bowen south to Mackay and communications to some communities has been affected.

“The heavy rain, which could result in flash flooding, is predicted to continue this week, with 24-hour rainfall totals of 150-200 mm (6-8 inches) expected and up to 500 mm (20 inches) possible, which could result in major river flooding,” Dr. Trevino reported. “The Bowen region boasts a sizable agricultural industry, and farmers remain uncertain of the impact on the tomato, sugar, rice, and capsicum (pepper) crops.”

According to AIR, residential buildings in Australia are mostly single family homes, with mostly apartments and condominiums in larger cities. Most of Australia’s residential buildings are either wood frame or masonry, many with brick veneer, and most often with metal roofs. Most homes are low-rise, so wind damage tends to impact building envelopes (roofs and exterior walls), AIR added.

The commercial and industrial building stock in Australia is predominantly concrete and steel. Large commercial buildings, especially mid-rise and high-rise structures, tend to be engineered and are therefore more resistant to wind damage than smaller buildings. Windows and cladding on engineered structures do risk impact damage from airborne debris, the release added.

Strong building codes have been in place across north Queensland since Cyclone Tracy in 1974, improving the resilience of structures built to code. For those structures that have been built to code, the structural building practices and requirements set down by the code will help mitigate the effects of high winds and associated debris.

50 specialists from Disaster Assistance Response Team are on their way to Cairns ahead of #cyclonedebbie! pic.twitter.com/H5sRKe4N6X

AIR suggested that with Cyclone Debbie’s high winds, structural damage can be significant, notably for older buildings. Rooftops remain particularly vulnerable, although windows and cladding on engineered structures also could be damaged by impact from debris. The high winds also can result in overturned caravans, and some structures in low-lying coastal areas are expected to experience storm surge damage. Given the heavy rain predicted, some structures in the inland area could also experience some precipitation-induced flood damage.

Cyclone Debbie will continue to deintensify, AIR reported, and is expected to weaken to a Category 1 storm by early Thursday. Debbie’s storm track should turn south and eventually southeast as the storm dissipates.