Today, McFarland’s cottage is in ruins, shoved off its foundation and torn apart on the weekend by rising floodwaters.

“It was a million-dollar property, to me,” the 84-year-old Fredericton resident said Monday. “It’s just a pile of rubbish there now … with the thrashing of the water.” 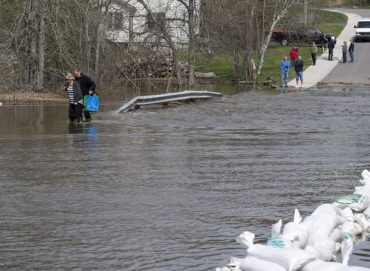 Residents wade across a flooded road in Saint John, N.B. on Sunday, May 6, 2018. Swollen rivers across New Brunswick are still rising, flooding streets and properties and forcing people from their homes in several communities. THE CANADIAN PRESS/Andrew Vaughan

With the flooding in central New Brunswick finally stabilizing after reaching record levels on the weekend, the extent of damage caused in areas cut off by rising water is starting to become clear.

McFarland’s cottage was one of many on Grand Lake that were swept away on Saturday as powerful winds pushed the big lake to places it had never reached before.

McFarland, a retired school district supervisor with four grown children, said his cottage had survived previous floods that reached historic levels in 1973 and 2008. And it was in 2008 that he raised the one-storey building by 18 inches, using concrete blocks.

“I was sure that I would never get flooded,” said McFarland. “But nothing like this has been recorded before in our history.”

Localized flooding is practically an annual event in this part of central New Brunswick. In late April and early May, heavy rains combine with the melting snow pack in northern New Brunswick to engorge the mighty Saint John River and its tributaries, which comprise a vast basin along the west side of the province.

Grand Lake, a 45-minute drive east of Fredericton, is the province’s largest lake at 20 kilometres long and five kilometres wide. It drains through the Jemseg River into the Saint John River east of Gagetown.

McFarland said he and his family will miss the cottage, but he’s thankful no one was hurt.

Rebuilding is not an option, given the expense, he said. However, McFarland has his eye on a used motorhome that he might park on his lakeside property.

To be sure, the loss of the cottage journals will be keenly felt by his entire family, he said.

“Those are the memories we had from every day, and those are gone,” he said, noting that his late father wrote the first entry in 1970. “It’s an emotional thing as well as a tactile thing … I hope that they might possibly be around, but I doubt it.”

McFarland said the cottage was insured, though he’s sure the policy doesn’t offer coverage for flooding.

Vanessa and Lonnie Clark, longtime residents of the Grand Lake area, said their home was intact, largely because it was built on a hill in the Sunnyside Beach area.

In the flooded fields nearby, the water has been contaminated by gasoline, floating propane tanks and other flotsam, said Vanessa Clark. The deck that was once attached to her mother’s neighbouring home was last spotted floating across the lake.

“It’s the waves that have caused so much damage,” she said. “Places are sideways, they’re collapsed. You look inside and the flooring and fridges are floating.”

Lonnie, who has lived in the house for 51 years, said nearby beaches have been destroyed and local roads remain washed out.

Meanwhile, provincial officials said floodwaters were expected to peak Monday in the Saint John area of southern New Brunswick. At one point, the river rose to 5.7 metres above sea level at Saint John, where flood stage is 4.2 metres. It was forecast to recede to 4.8 metre above sea level by Friday.

Levels in other areas of the province, including Fredericton and Maugerville, were also forecast to recede throughout the week, while remaining above flood levels.

In Hampton, about 40 kilometres northeast of Saint John, Blair Hyslop surveyed his flooded greenhouses with weary resignation. He has been manning pumps 24 hours a day since Friday.

“We put the word out for volunteers and dozens and dozens of people came,” said Hyslop, who runs Kredl’s Corner Market.

“We estimate we used about 4,000 sandbags to build a three foot wall all around this building. And then we pumped thousands of gallons of water over the wall, and we continue to pump continuously.”

In Rothesay, where water levels are expected to crest sometime Tuesday, Kevin Beaupre said he won’t feel any relief until the water on the other side of his wall of sandbags starts to recede.

“Every time a high tide comes up, I get nervous again,” said Beaupre, who packed thousands of sandbags around his home and is using pumps to drain his basement. “You see it go a little bit higher … so I’m microadjusting it.”

“When we talk about the water going down, that is not a trigger for people to go home necessarily,” MacCallum told a media briefing Monday afternoon.

“A very deliberate process has to be followed to make sure it’s safe for them to go home … In some cases, it may be a matter of days after the water levels are below flood stage. In some cases, it will be weeks.”

MacCallum said the cleanup will be a “difficult phase.”

“This is a period of time when people do need to be patient. They need to understand that it is as deliberate an operation to go back as it is to get out.”

More than 1,150 people have registered with the Red Cross to say they have evacuated their homes, while many others have left to stay with family or friends without registering.

The Red Cross has launched a fundraising campaign to help flood victims.

The Trans-Canada Highway between Fredericton and Moncton has been closed since last Thursday. And the floodwaters have cut off all roads around the community of Chipman, though Downey said crews are working to upgrade a route so that emergency vehicles have access to the community.

– With files from Michael MacDonald, Aly Thomson and Alison Auld in Halifax