Defamation award of aggravated and general damages against commentator upheld

The Supreme Court of Canada announced Friday it will not hear an appeal from a political commentator and lawyer who was successfully sued for $80,000 for calling a person a liar in blog posts. 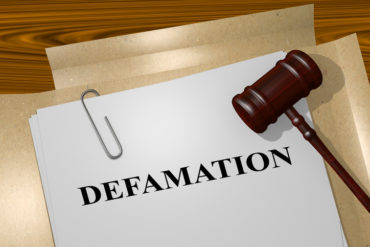 In 2014, a judge with the Ontario Superior Court of Justice awarded Khurrum Awan $50,000 in general damages and $30,000 in aggravated damages. Awan had sued Ezra Levant for defamation over blog posts made in 2008 through 2010.

Awan – a law student at the time – was one witness in 2008 hearing before the British Columbia Human Rights Tribunal against Rogers Publishing Ltd. That hearing arose from complaints over a book excerpt published in 2006 in Maclean’s magazine. The tribunal ruled against the complainants, who essentially argued that the publication of the excerpt would expose them to hatred or contempt on the basis of their religion.

Court records indicate that Levant referred to Awan as a “liar” in blog posts published after Awan was cross-examined, during the BCHRT hearing, by a lawyer for Maclean’s.

Among other things, a plaintiff in a libel case must prove that the defendant’s words “would tend to lower the plaintiff’s reputation in the eyes of a reasonable person,” Justice Wendy Matheson noted in her ruling released in November, 2014.

One defence in a libel suit is justification.

She ruled that Levant’s allegations, that Awan was a “liar,” were assertions of fact rather than comments, and that Levant failed to prove that Awan “had an intention to deceive.”

Justice Matheson also found there was “ample evidence” demonstrating “express malice” on the part of Levant.

Levant was largely unsuccessful on appeal. Levant applied in February 2017 for leave to appeal to the Supreme Court of Canada, which announced June 9 that his leave application is dismissed.

Among other things, Levant had argued that the aggravated damages award duplicated the general damages award. The Court of Appeal for Ontario disagreed.

The “potential for overlap and therefore double counting is controversial and has led some to call for the abolition of separate awards of aggravated damages in defamation actions,” Justice Kathryn Feldman of the Court of Appeal for Ontario wrote.

The Court of Appeal for Ontario cited the 1995 ruling by the Supreme Court of Canada in Hill v. Church of Scientology of Toronto. That case arose from a defamation lawsuit, filed by crown attorney Casey Hill, over a press conference held in 1984.

In Hill, the Supreme Court of Canada noted that aggravated damages “may be awarded in circumstances where the defendants’ conduct has been particularly high-handed or oppressive, thereby increasing the plaintiff’s humiliation and anxiety arising from the libellous statement.”

In order to award aggravated damages, “there must be a finding that the defendant was motivated by actual malice, which increased the injury to the plaintiff, either by spreading further afield the damage to the reputation of the plaintiff, or by increasing the mental distress and humiliation of the plaintiff,” wrote Justice Peter Cory of the Supreme Court of Canada in 1995 in Hill v. Church of Scientology of Toronto.

Justice Cory “also acknowledged the likelihood of some overlapping factors when assessing” both general and aggravated damages, Justice Feldman of the Court of Appeal for Ontario wrote in Levant in 2016.

But the trial judge in Awan’s lawsuit against Levant “made no error by awarding $80,000 to fully compensate the respondent for the damages she found that he suffered from the malicious conduct of the appellant, whether the amount included for aggravated damages is viewed separately or as part of the general damages award,” added Justice Feldman. Concurring were Justices Janet Simmons and Paul Rouleau.

The article that was the subject of the 2008 B.C. Human Rights Tribunal hearing that Levant blogged about was an excerpt from the book America Alone by Mark Steyn.

Maclean’s “did not explicitly endorse the author’s views, as it indicated that it was publishing an excerpt from a book, and published letters to the editor critical of the Article’s content following its release,” the B.C. Human Rights Tribunal wrote in its decision.

Among other things, Steyn commented that Islam “has serious global ambitions, and it forms the primal, core identity of most of its adherents – in the Middle East, South Asia and elsewhere.” Expert witnesses testified that this statement was inaccurate.

The article “may attempt to rally public opinion by exaggeration and causing the reader to fear Muslims, but fear is not synonymous with hatred and contempt,” BCHRT ruled in 2008.