Ontario politicians from all three parties spoke Thursday in favour of an opposition private member’s bill that proposes to allow the transportation minister to “create designated highway texting zones.”

Bill 190, the Safe Texting Zones Act, was referred Thursday to the Standing Committee on Finance and Economic Affairs. Those zones are intended to remind drivers of legal opportunities to use their mobile devices. 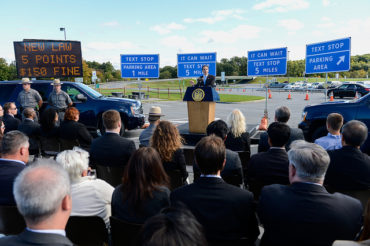 September 23, 2013 – New Baltimore: Governor Cuomo continued the state’s efforts to reduce distracted driving by unveiling special “Texting Zones” along the New York State Thruway and State Highways that will give motorists a pull-off area to park and use their mobile devices. Existing Park-n-Ride facilities, rest stops, and parking areas along the Thruway and Highways will dual-function as Texting Zones, and signage will be placed along the highway to inform drivers where the Zones are located. A total of 298 signs will be located along major highways across the state, notifying motorists to 91 Texting Zone locations. Photo: New York Governor Andrew Cuomo’s flickr site.

If passed into law, Bill 190 would authorize the Minister of Transportation “to create designated highway texting zones where a driver is able to stop safely to use their device,” said Vic Fedeli, Progressive Conservative MPP for Nipissing, in the legislature. “This includes existing commuter parking lots, transit stations or service stations, and does not require any new infrastructure.”

“The real impetus of this bill would require that signage be displayed approaching these texting zones,” Fedeli said May 19 during second reading of Bill 190. “These would remind drivers that there is a nearby opportunity for them to legally and safely use their cellphone. Of course, people can still use their hand-held devices if a vehicle is pulled off a roadway or lawfully parked. This bill would designate specific areas to do exactly that, to assist drivers in obeying the law.”

“With the passage of Bill 31, the Making Ontario’s Roads Safer Act, this past June, drivers now face stiffer fines and penalties upon conviction,” Anderson told the legislature at Queen’s Park in Toronto. “I agree with [Fedeli] that that’s simply not enough and we have to do more to deter drivers from texting while driving.”

Bill 31, the Transportation Statute Law Amendment Act (Making Ontario’s Roads Safer), increases the maximum fine for distracted driving to $1,000. Bill 31 also provides for administrative licence suspensions “where a person is driving a motor vehicle or operating a vessel while impaired by a drug or by a combination of a drug and alcohol.”

Other changes to the Highway Traffic Act, from Bill 31, include a new rule that requires drivers to “remain stopped at a pedestrian crossover or school crossing until the person crossing the street and the school crossing guard are off the roadway.” Before, drivers were allowed to proceed once the pedestrian or crossing guard were no longer on the driver’s half of the roadway, the provincial government states in an explanatory note to Bill 31.

“Texting while driving cannot be done under any circumstances,” Anderson said Thursday. “The reality is, the chance of an accident dramatically increases the second you take your eyes off the road, and it’s just not worth the risk.

People of all ages, including senior citizens and young people, are texting and driving, suggested Wayne Gates, transportation critic for the New Democratic Party and MPP for Niagara Falls.

“Even though a person might think they’re just going to read a text or maybe they’ll type a little bit and then look at the road and then go back to typing, it doesn’t make a difference,” Gates said. “We know that people come up with all sorts of plans that they use to convince themselves they’re just sending one more text, until it goes wrong. It just happens too fast to be able to react.”

It takes about five seconds to send or read a text message, suggested Monique Taylor, NDP MPP for Hamilton Mountain.

“It doesn’t sound like a lot of time, but if you’re travelling at 90 kilometres per hour, that’s enough time to take you from one end of a football field to the other,” Taylor said.

“Drivers who text messages are 23 times more likely to be involved in a crash,” Fedeli said. “Economic losses caused by traffic-collision-related health care costs and lost productivity are at least $10 billion annually. That’s about 1% of our [gross domestic product].”

“Existing park-and-ride facilities, rest stops and parking areas along the roads were to be equipped with texting zone signage, each serving double duty as one of the 91 locations across the state,” Fedeli said. “When introducing the initiative, Governor Cuomo said, ‘With this new effort, we are sending a clear message to drivers that there is no excuse to take your hands off the wheel and eyes off the road, because your texts can wait until the next texting zone.’ I think that’s something we can all agree on.”