Disaster planning: How to get insurance funds to evacuees

Insurance professionals should be planning in advance how they will get emergency funds into the hands of their insured clients during a natural catastrophe, a senior Intact Insurance executive told the C4 2018 conference in Ottawa Friday. 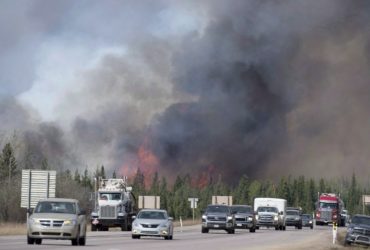 A convoy of cars and trucks pass wildfires as they are evacuated from Fort McMurray, Alta., on highway 63 south of the city on Saturday, May 7, 2016. The newspaper that serves Fort McMurray is bracing for more change six months after a wildfire forced its staff to flee the northern Alberta city along with more than 80,000 other people. THE CANADIAN PRESS/Jonathan Hayward

Finding alternative ways to send insurance funds to evacuees during a catastrophe is one lesson learned after the massive blaze that destroyed 6,000 buildings in Fort McMurray, AB in 2016, Patrick Barbeau, senior vice president of claims at Intact, told a conference panel on wildfire perils.

“What we needed to do is to send emergency funds, additional living expenses, to people,” said Barbeau. “If you rely on paper cheque, and you only have the home address, this becomes a real challenge. You need to ramp up your capacity quickly to send funds electronically and through alternative means.”

Communicating with people after an evacuation is another issue affecting an insurance company’s response. Intact took calls from 12,000 people within hours after the May 2016 blaze, which destroyed about 900,000 hectares of forest and resulted in a record-breaking 70-day state of emergency.

The evacuation of people from their homes raised challenges in how to get the insurance money to the insurance company’s clients, Barbeau said. Since Fort McMurray was in an isolated area, evacuees were not located in one single evacuation centre, but rather spread out throughout the entire province. Some moved across provincial boundaries, ending up as far away as Newfoundland.

Barbeau recommended that insurance professionals collaborate closely with government officials during a disaster, so that insurers can relay the proper information to the front lines and guide clients through the claims process.

Another lesson for the industry is to explore flexible ways for insureds to use their insurance money to rebuild their lives after a catastrophic event. An insurer’s response to a catastrophe can be complicated by social and economic conditions both before and after the loss, including property values and employment rates.

“We faced situations [in Fort McMurray] where people had moved there, built a house, still have the house, but were maybe looking for a job somewhere else,” Barbeau said. “What do you do with the insurance? I think, as [an industry], we need to change our products and allow flexibility. Like, do we force a rebuild there? For a house that will be for sale, and that will be difficult to sell for awhile? Or do you allow cash settlements for [homeowners] to buy something somewhere else?”

2 Comments » for Disaster planning: How to get insurance funds to evacuees