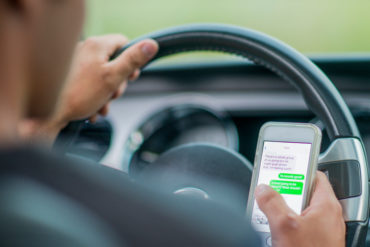 “In fact, distraction and driver inattention is one of the top contributing factors in motor vehicle fatalities in BC and contributes to more than one quarter of all car crash deaths,” the insurer reported, using police data from 2011 to 2015. Distraction is defined as where one or more of the vehicles involved had contributing factors, including use of communication/video equipment, inattentive drivers and driver internal/external distraction.

By region, according to the 2011 to 2015 police data, 26 people are killed in distracted-driving related crashes in the Lower Mainland every year on average. This compares to eight annually on average on Vancouver Island, 32 on average in the Southern Interior and 14 in the North Central region.

This month, police across B.C. are ramping up distracted driving enforcement and community volunteers are conducting “Cell Watch” deployments to remind drivers to take a break from their phone while driving, the release noted. New this year, ICBC is working with four carshare companies in B.C. – Car2Go, Evo, Modo and Zipcar – to help spread the message to carshare customers, ensuring more drivers in the province are aware of the risks of driving while distracted. The campaign will feature new TV and radio advertising, airing throughout the province from Sept. 8 to Oct. 11, as well as digital and social media advertising.

“Distracted driving is entirely preventable, as are the crashes and casualties caused by the behavior,” the province’s Attorney General, David Eby, said in the release. “To address this issue, our government is moving forward with a pilot program of new technologies to eliminate distracted driving among high-risk groups, and to increase public awareness of the risks of this dangerous driving behaviour. Drivers need to be part of the solution too: put down your phones before driving; keep them out of reach; and keep yourself, your passengers and other road users safe.”

Last week, the Ontario Provincial Police (OPP) reported that inattentive driving was linked to more collisions on OPP-patrolled roads so far this year than speeding and alcohol/drug-related collisions combined. Since Jan. 1, 2017, driver distraction was reported as the primary cause in 6,360 road collisions, compared to 4,700 speed-related crashes and 1,158 involving a driver who consumed alcohol or drugs. OPP also said last week that 47 people have died so far this year, up from 39 deaths this time last year.