WASHINGTON – The Amtrak engineer whose speeding train ran off the rails in Philadelphia last year was apparently distracted by word that a train nearby had been hit by a rock, federal investigators concluded Tuesday, pinning most of the blame on him for the wreck that killed eight people.

“He went, in a matter of seconds, from distraction to disaster,” National Transportation Safety Board member Robert Sumwalt said. 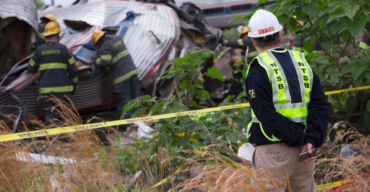 At the same time, the NTSB said a contributing factor was the railroad industry’s decades-long failure to fully install positive train control, GPS-based technology that can automatically slow trains that are going over the speed limit.

Had positive train control been in use along that stretch of track, “we would not be here today,” said Ted Turpin, an NTSB investigator.

Engineer Brandon Bostian heard about the rock-throwing on the radio and was apparently so preoccupied by it that he lost track of where he was and accelerated full-throttle to 106 mph as he went into a sharp curve with a 50 mph speed limit, investigators said at an NTSB hearing to pinpoint the cause of the May 12, 2015, derailment. About 200 people aboard the Washington-to-New York train that night were injured.

Bostian, who has been suspended without pay since the crash for speeding, did not attend the hearing. He and his lawyer did not immediately return calls and emails seeking comment.

Ron Kaminkow, an Amtrak engineer who also serves as secretary of the industry union consortium Railroad Workers United, said the board’s conclusion underscores the need to put two engineers on trains. “If one buys into this theory, having another engineer or conductor would’ve prevented the wreck,” he said.

As for what this could mean for Amtrak and Bostian, the railroad has already taken responsibility for the tragedy, and its liability is capped under federal law at $295 million, which could easily be exhausted, given the number of deaths and serious injuries.

The Philadelphia District Attorney’s Office is helping the NTSB on the investigation, but a spokesman would not comment on the possibility of criminal charges.

The hearing included a spirited discussion over how much blame to assign to the lack of positive train control. In the end, the NTSB cited that as a secondary factor.

But NTSB chairman Christopher Hart warned that unless the technology is put fully in place soon, “I’m very concerned that we’re going to be back in this room again, hearing investigators detail how technology that we have recommended for more than 45 years could have prevented yet another fatal rail accident.”

Among other things, the NTSB also recommended research into train seat belts and ways to secure luggage that can become missiles in a derailment; training for crew members on multitasking; and new equipment and procedures to help engineers keep track of their location in spots where there is no positive train control.

In a statement, Amtrak said it “deeply regrets the tragic derailment” and will carefully review the NTSB findings and recommendations and quickly adopt them where appropriate. Amtrak noted that positive train control is already in place on most of its portion of the Northeast Corridor.

The problem of people throwing rocks at trains is so common that train crews have a term for it: “getting rocked.” But it is a danger railroads are almost powerless to stop. No one was ever arrested in the rock-throwing in Philadelphia.

Bostian told investigators that just before the wreck, he was listening to radio traffic from a Philadelphia commuter train operator who said a rock had shattered his windshield. At one point, Bostian passed the commuter train on an adjoining track.

He told the NTSB that he was concerned about the welfare of the commuter train’s engineer and “a little bit concerned” for his own safety, but he never indicated his own train had been struck, too. And the NTSB concluded it wasn’t hit, despite early suspicions triggered by a dent discovered in Bostian’s windshield.

Investigators said they believe Bostian was accelerating because he thought he had already passed the sharp Frankford Junction curve. After the curve is a straightaway where the speed limit climbs to 110 mph.

Authorities ruled out cellphone use on Bostian’s part, as well as drugs or alcohol.

“Excluding all the other suspects that we looked at, the best we could come up with was that he was distracted from this radio conversation about the damaged train and forgot where he was,” Hart said.

Bostian told investigators he couldn’t remember some of what happened that night – probably because of a blow to the head suffered when his locomotive overturned, NTSB medical officer Mary Pat McKay.

Thomas Kline, a lawyer for passengers injured in the crash, questioned the NTSB findings and said he wonders whether the engineer speeded up to get through the area quickly and avoid getting “rocked.”

Duy Nguyen, of Teaneck, New Jersey, a passenger who suffered a cut on his head and fractures in his back, attended the NTSB hearing. The Temple University professor said he was puzzled by the findings.

“The part that doesn’t make sense is how does one accelerate when you’re distracted?” Nguyen said. “The inclination is to slow down.”

Bostian was known among his friends for his safety-mindedness and love of railroading. Before the crash, he apparently commented in an online forum for train enthusiasts, lamenting that railroads hadn’t been fast enough to adopt Positive train control.

The NTSB has pushed for Positive train control since the 1970s. Over the past 20 years, the board has cited the lack of such technology as a contributing factor in 25 crashes, including deadly wrecks in Chatsworth, California, in 2008 and New York City in 2013.

Amtrak has now installed PTC on all the track it owns on the Northeast Corridor from Boston to Washington. A 56-mile stretch from New Rochelle, New York, to New Haven, Connecticut, is owned by other railroads and is expected to have automatic controls by the end-of-2018 deadline.

At the time of the Philadelphia crash, the technology had been installed at the accident site but was still being tested.

Before the NTSB voted on its conclusions, T. Bella Dinh-Zarr, the board’s vice chairman, strongly urged the panel to put more blame on the lack of Positive train control.

“Eight people have died, dozens more have been injured – life-changing injuries – because the government and industry have not acted for decades on a well-known safety hazard,” Dinh-Zarr said. “I ask: Why does our probable cause focus on a human’s mistake and what he may have been distracted by?”

The investigation also pointed up the need to make passenger trains safer. In the derailment, the train’s emergency windows dislodged as the cars slid on their sides, and four people were ejected and killed, according to investigators.