If a home collapses into a sinkhole, is there coverage under a standard homeowner’s policy or earthquake endorsement?

Not under many homeowner’s policies, but possibly under the earthquake endorsement, depending on the policy language and if the quake caused the sinkhole. 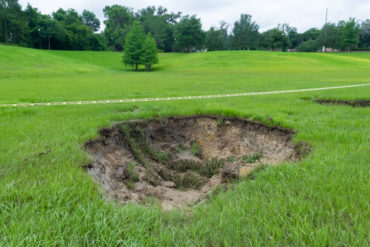 “Our understanding is that [standard homeowner policies] usually contain some form of an earth movement exclusion which, in many cases, would also encompass sinkhole if it were to arise spontaneously on its own,” Stefan Tirschler, product and underwriting manager with Square One Insurance Services in Vancouver, told Canadian Underwriter earlier this month.

The issue came to light recently after a homeowner said that they were planning to take legal action against their insurer because they wouldn’t cover the cost of their house damaged by a sinkhole in Nova Scotia. The homeowner told CBC News that they were denied coverage because of an earth movement exclusion. It also doesn’t appear that they had an earthquake endorsement.

Tirschler said that the proximate cause of loss is critical to determining coverage related to earth movement. “If the sinkhole-related damage is concurrent with or caused by an earthquake, then coverage may be provided by some insurers’ earthquake endorsements,” he said. “However, if an ordinary sinkhole causes damage to a home in the absence of an earthquake, then an earthquake endorsement generally will not be triggered, and an ‘earth movement’ exclusion may continue to apply under some policies.”

There is a lot of variation in policy language, Tirschler notes. “Some go so far as to specifically state that earthquake will include other forms of earth movement resulting from earthquake,” he said. “And then some are not quite that specific, and they’ll simply read in coverage for the peril of earthquake itself. So, depending on the specificity of the endorsement, you may see that coverage either expanded or contained depending on what the insurer intended when they drafted it.”

Pete Karageorgos, director of consumer and industry relations for Ontario with the Insurance Bureau of Canada, agrees that coverage will vary by insurer. IBC has advisory wording related to earthquake coverage, but “companies are free to use their own policy wordings.” For example, IBC considers a single earthquake to be shocks that occur within 168 consecutive hours, but some companies may use different time periods in their policies.

Coverage may exist if, as a result of an earthquake, there is a landslide, snowslide or a sinkhole that opens up, “which is typically considered subsidence, liquefaction,” Karageorgos said. He added that settling of earth after a new home is built, for example, is not covered. “It’s not an insurable situation, it’s a maintenance issue.

“The lesson at the end of the day for consumers is always read your policy and understand it and ask your insurance representative what you’re covered for.”

3 Comments » for Does an earthquake endorsement cover sinkhole damage?