Hurricane Dorian will likely pass over Nova Scotia and Prince Edward Island with hurricane force winds, before developing into a post-tropical storm over Newfoundland and Labrador, according to the latest projections from the Canadian Hurricane Centre (CHC).

A tropical cyclone statement from CHC released early Thursday morning said “the most likely track projection” brings Hurricane Dorian south of the Maritimes on Saturday, pushing through eastern Nova Scotia later in the day, and then over western Newfoundland by Sunday morning. 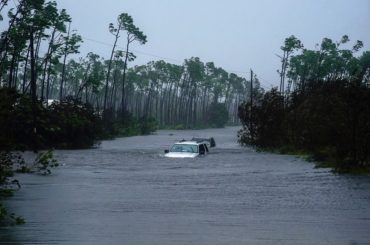 Cars sit submerged in water from Hurricane Dorian in Freeport, Bahamas, Tuesday, Sept. 3, 2019. Dorian is beginning to inch northwestward after being stationary over the Bahamas, where its relentless winds have caused catastrophic damage and flooding.(AP Photo/Ramon Espinosa)

“Rainfall will be a major factor and heavy rainfall will likely lead to flooding,” CHC said in an updated statement Thursday afternoon. “The highest rainfall amounts are likely for Nova Scotia, Prince Edward Island, and the Gulf of St. Lawrence region, where 50 to 100 mm is expected. Forecast guidance is also suggesting a swath in excess of 150 mm [of rain] north and west of Dorian’s track.

“Gusts of up to 120 km/h are likely along parts of Nova Scotia, the southwestern coast of Newfoundland, and the Quebec Lower North Shore. As the storm moves across Nova Scotia, there is a possibility of hurricane force [winds] behind it.”

Wind impacts will likely be enhanced by foliage on the trees, adding to tree damage and tree falls and causing power outages. 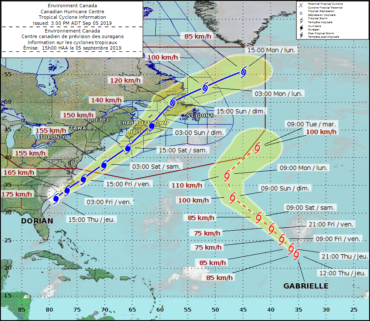 Large waves are forecast, especially for the Atlantic coasts of Nova Scotia and Newfoundland and eastern portions of the Gulf of St. Lawrence. The waves will reach the southwestern shore of Nova Scotia on Saturday and build to nearly 10 metres by Saturday night, reaching southern Newfoundland by Sunday morning. Waves near or higher than five metres are predicted to impact the north-facing coasts of the Gulf of St. Lawrence. Waves in excess of 12 metres are likely south of the storm track, beginning late Saturday and approaching southern Newfoundland Sunday morning.

“Storm surge is possible, mainly for parts of Nova Scotia, Prince Edward Island, and Newfoundland, but it is too early to be specific about significant impacts, if any.”

One of the most powerful Caribbean storms on record, Dorian was at Category 5 strength (winds over 252 km/h) when it slammed into northern Bahamas early in the week, The Weather Network reported. At one point, it was all but stationary, parking itself over Grand Bahama for most of two days.

Though downgraded to Category 2 strength on Tuesday and Wednesday, the storm picked up steam and is moving parallel to the U.S. southeast coast and “getting dangerous close to Charleston, South Carolina.” It should move to the New England region Friday, before approaching Nova Scotia later Saturday.