MONTREAL – Quebec is often held up as a model for other provinces to follow when it comes to regulating the growing home-sharing market, but doubts are being raised over whether recent provincial changes are having any impact. 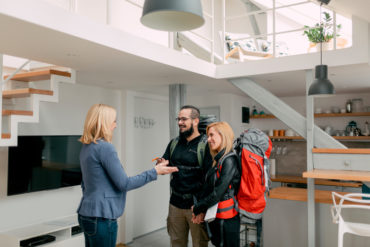 In April, the provincial government amended its tourist accommodation law in an effort to help level the playing field between people who rent out their homes through services such as Airbnb, and hotels and bed and breakfasts.

Anyone advertising a rental accommodation for tourists for no more than 31 days on a “regular basis” is required to obtain a $250 permit, have at least $2 million of insurance and pay a nightly hotel tax.

So far, fewer than 500 permits have been issued across the province, including just 41 in Montreal, according to the province’s Tourism Department.

That represents a fraction of the more than 10,000 units listed on websites like Airbnb, HomeAway and Kijiji.

Department spokesman Guy Simard said an increase in the number of inspectors from two to 23 and fines ranging between $2,500 and $50,000 will “certainly help dissuade illegal tourist establishment operations.”

“These modifications are only five months in the making (and) time is still required to put everything in place,” he said, adding that a campaign was launched in the summer to inform the public of the legislation. “Time will also tell if results are satisfying.”

Inspectors have processed 267 files since April, 200 of which stemmed from complaints. About half were found to be in compliance, while the rest continue to be evaluated. Two have been transferred for prosecution.

A city councillor for the chic Plateau district in Montreal, where there have been many neighbourhood complaints about homes operating as illegal lodgings, said the provincial efforts have had no effect.

“It’s so easy to go around the rule and go on with the illegal activity,” Marianne Giguere said.

Richard Geoffrion, a resident of Giguere’s district, said he has seen guests of neighbours’ homes – homes he believes are rented out illegally to tourists – throw wild late-night parties and misbehave to the point where it has attracted police surveillance.

“We hope to have a normal residential life,” he said.

Alex Dagg, Canadian policy lead for Airbnb, said disruptions from guests gain public attention but they are by far in the minority.

“In every situation sometimes you’re going to have bad actors,” she said. “By far the majority of people, both guests and hosts in our platform, act in a very responsible way.”

The Quebec Hotel Association and the union representing hotel workers say the provincial law is better than nothing but isn’t strong enough.

“The law lacks teeth because of the way it was written,” said association vice-president Patrick Thevenard.

He said prosecutions take too long, allowing people to continue operating for years before a ruling is issued. He’d like to see the onus of proof change so operators of suspected illegal operations have to demonstrate their compliance and also wants municipalities to develop common rules across the province.

Dagg said Airbnb welcomes efforts to regulate the home-sharing industry but wants to work with municipalities – including Vancouver and Toronto, which are studying regulations – to develop “sensible” rules that address specific problems in communities.

“We think we need to work with cities individually to look at regulations that would make sense and that are unique to each city,” she said.

For some municipalities, that could include drawing a line between typical hosts and commercial-type operators who purchase units and rent them out, Dagg added.

Since launching in 2008, Airbnb says it has attracted more than 100 million guests worldwide, including Canada.

In a report the company released last week looking at Ontario, Airbnb said the “vast majority” of hosts in that province share their primary residence, typically earning $3,900 a year.