Driverless cars could have significant credit implications across a wide range of sectors and companies as the technology becomes more advanced and widespread in the coming years, Moody’s Investors Service said in a report released on Tuesday. 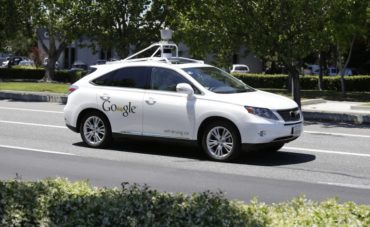 FILE – In this May 13, 2014 file photo, a Google self-driving car goes on a test drive near the Computer History Museum in Mountain View, Calif. Self-driving cars are more likely to be a threat than a boon to public safety because of unresolved technical issues, engineers and safety advocates told the government Friday, countering a push by innovators for expedited government approval. (AP Photo/Eric Risberg, File)

Although the extensive use of self-driving vehicles is still some way off, the technology has the potential to make road travel safer and cheaper, while having a big impact on vehicle production, financing and usage, Moody’s said in a press release. It is also likely to carry credit consequences for insurers, automakers, banks and technology firms.

“While there are still many uncertainties around the future of driverless cars and trucks, the technology is likely to have credit implications across a wide range of sectors,” said Colin Ellis, Moody’s managing director, chief credit officer for Europe, the Middle East and Africa, and co-author of the report, Autonomous Vehicles Will Drive Change from Auto Manufacturing to Insurance.

For the insurance industry, the impact on insurers could be significant. Lower accident rates should result in lower costs and premiums. Set against that, autonomous vehicles may be more expensive to replace, which could push up premiums.

However, the biggest impact would be if car manufacturers were to accept liability for accidents due to autonomous vehicles, which could dramatically reduce demand for traditional insurance: this shift in liability could also arise from new regulations or legislation, Moody’s said.

Driverless cars are also likely to open up new forms of competition for traditional car manufacturers, with software and data firms such as Google entering the market. The new technology could also create new opportunities for manufacturers. These vehicles could, in principle, capture information about households’ travel and other habits, particularly if the cars link with other household systems. This data would be valuable for banks, insurers and other companies and could also allow manufacturers to identify new goods and services that households may want to purchase, further diversifying revenue streams.

Ultimately, the car itself may become more commoditized, with buyers more focused on the software that allows the vehicle to drive autonomously. In this scenario, software and semiconductor firms may be best placed to reap the benefits of demand, the report suggested.

Secure IT hardware and software will also be critical to protect autonomous vehicles from both inadvertent and malicious interference, which will benefit semiconductor firms alongside software companies. Similarly, hardware producers who build the sensors and cameras for autonomous vehicles should also benefit.

In theory, automated vehicles could free up space on the roads, reduce the risk of accidents and cut journey times for individuals and companies. This could cut transport costs for freight haulage and increase employees’ productivity, Moody’s said.

For automakers, driverless vehicles are likely to have mixed consequences. Companies could benefit from demanding a price premium for these cars. However, they could lose out if smoother computer-operated driving styles were to reduce wear and tear and, consequently, give cars a longer lifespan before they need replacing.

The rise of autonomous cars could also lead to changes in car financing. In principle, their premium nature could reduce the need for car financing, if richer households with less need for credit are the main customers.

However, automakers could also seek to increase the number of owners of driverless cars by encouraging consumers to rent the operating systems and software that drive the vehicle, emulating the approach already adopted with some battery-powered cars.