A windstorm in early April is estimated to have cost insurers more than $85 million, mostly from home insurance claims in Ontario, according to Catastrophe Indices and Quantification Inc. (CatIQ).

The April 4-5 storm brought severe rain and freezing rain, heavy snow and damaging winds to parts of Ontario and Quebec. Widespread wind damage was reported across several regions of Ontario and resulted in more than 145,000 power outages and a destroyed home development in Niagara region, the Insurance Bureau of Canada (IBC) said in a press release Monday. 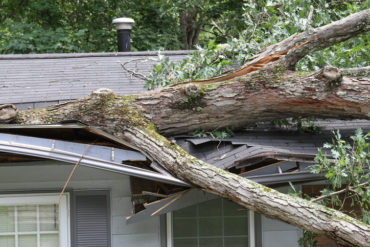 The storm then tracked to Quebec. Snow led to poor driving conditions that resulted in various car collisions in Quebec and Ontario, including a 50-car pile-up on Highway 400 in Barrie, Ont.

The April 4-5 storm is not to be confused with a major ice storm that hit Ontario on April 14-16, causing widespread power outages and damage arising from wind, ice and water. Damage estimates from the April 14-16 ice storm are expected in a few weeks, but insurers at the time said they were treating the ice storm as a catastrophic event.

Craig Stewart, vice president of federal affairs with IBC, said insured losses from storms such as the April 4-5 storm are increasing rapidly. However, this is only part of the picture, he said. “Taxpayers are also bearing the brunt of these costs since many losses are uninsured,” Stewart said.

Steve Kee, IBC’s director of media and digital communications, noted that wind damage is typically covered in a policy. He added that “certainly there is a transition to people having overland flood coverage, but not everyone has that.” He said IBC has seen “many instances of people not having overland flood… and having to apply for DFAA (disaster financial assistance arrangements).”

“Governments have owned overland risk up to now as the effective insurer for flood risk,” Kee said. “The insurance industry has just started to offer products, but the market is not yet mature and these products vary by company and jurisdiction. Consumers must, as always, familiarize themselves with their policies and enquire about overland flood insurance when their policy is up for renewal.”

Overland flood coverage was generally unavailable in Canada until 2015, when major insurers started offering such coverage on some home insurance policies.

IBC said that a review of recent severe weather damage shows that insured losses in Ontario alone have surpassed half a billion dollars over the past 12 months. These events included:

IBC said this spring season in eastern Canada has been particularly harsh, and it expects that the early April event was only a prelude to other events to affect the region this spring.