Too early to confirm costs from flooding in B.C., Ontario, Quebec and Maritimes: Aon 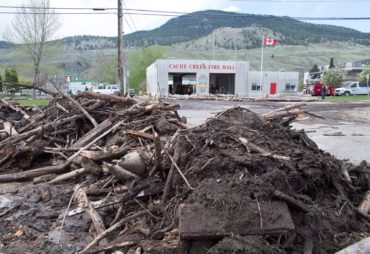 Flood debris is seen on the road in Cache Creek, B.C., Saturday, May 6, 2017. The small B.C. community was hit this week with flooding from melting snow pack. THE CANADIAN PRESS/Jonathan Hayward

Financial losses are expected to reach well into the millions in U.S. dollars, but “it remains too early to confirm what the final cost may be for the event, as damage surveys remain ongoing after rivers and lakes have only recently crested,” said the alert from Impact Forecasting, Aon Benfield’s catastrophe model development team. “It is too preliminary to make any direct comparisons as to whether the current flooding across Canada will be a billion-dollar event, let alone reaching the levels seen in 2013 across Alberta and Ontario,” Impact Forecasting said, adding that according to the Insurance Bureau of Canada, the flood peril has surpassed fire as the leading cause of home insurance payouts in recent years.

The alert said that so far, one person was killed and three others were listed as missing and presumed dead. The worst flooding occurred in the provinces of British Columbia, Quebec, Ontario and the Maritimes as the federal government deployed some 2,200 members of the military to aid in relief and recovery. The floods were exacerbated by weeks of heavy rainfall combining with snowmelt to cause rivers to swell throughout the country.

According to the alert, British Columbia’s Ministry of Forests, Lands, and Natural Resource Operations’ monthly bulletin for April noted that the southern portion of the province experienced prolonged periods of cool, moist and unstable conditions through April, while drier and warmer conditions prevailed through the northern part of the province. Extreme rainfall values were recorded in the south, particularly through the Central and South Interior, Okanagan and Kootenay, with precipitation levels typically 150 to 300 per cent of the long-term monthly average, the alert said. Coupled with seasonal snowmelt in the northeast of the province, this extreme rainfall led to most rivers in the province flowing well above normal for the time of year. Following further rainfall for several parts of the province on May 5, several of the already high rivers overflowed their banks.

For central and eastern Canada, several low pressure systems brought further rainfall to portions of Ontario, Quebec and the Maritimes from May 1-6, following a wet April. The cat alert said that the most significant of the early May downpours occurred on May 5 and 6, as a low pressure system became wedged between two high pressure areas and stalled over eastern Canada, drawing abundant moisture from the Atlantic and Gulf of Mexico. This resulted in further heavy, prolonged rainfall for the already saturated provinces that led numerous rivers to overflow their banks.

Related: Flooding in Ontario and Quebec in April and May estimated to cost “well into the millions” in U.S. dollars: Aon Benfield

In Eastern Canada, one person was killed and another was missing and presumed dead after their vehicle was swept away by the swollen Sainte-Anne River in Quebec’s Gaspé region, the alert said, noting that one person managed to escape from the vehicle. In a separate incident, one person was seriously injured after coming into contact with electrified floodwaters in Gatineau, Que. on May 6. More than 1,900 residents were evacuated in Quebec, the hardest-hit province. According to Impact Forecasting, more than half of the evacuees were from Gatineau, where 380 homes were evacuated on May 8. Officials warned that a further 900 homes in the town were at risk.

Elsewhere, almost 250 homes were flooded in Montreal, almost 340 homes were inundated in Laval, and as many as 30 homes were inundated in Champlain Township in Ontario. At least 171 municipalities from the Ontario border to the Gaspé Peninsula were affected and around 2,700 homes in Quebec were inundated in total, Impact Forecasting said. More than 400 roads across the province were flooded, several of which were washed out in places. Government offices, businesses, schools, childcare centers and service centers were closed in flood-affected areas on May 8 and 9, but most reopened the following day. Ten towns and cities across Quebec declared states of emergency, including the province’s largest city, Montreal.

Flooding was also noted from the Lanark Highlands to Champlain Township in Ontario. Both the Ottawa and Rideau Rivers overflowed their banks near the capital region, flooding approximately 350 homes. The worst affected areas were Cumberland, Constance Bay, Fitzroy Harbour, Dunrobin, MacLarens Landing and Britannia. Of the 350 flooded homes, 323 were in West Carleton, 21 were in Cumberland, 10 were in Bay and two were in Britannia.

The alert also pointed out that many offices and businesses, including government offices remained closed on May 8 and 9. Subsequent contamination of the Ottawa River occurred following the flood as sewage effluent was released directly into the river without being treated, as water treatment facilities in Ottawa were overwhelmed. Authorities warned that homes that were affected by flooding were likely to have been contaminated and advised residents to take extreme precautions and to destroy any contaminated furniture.

In New Brunswick, the Saint John River overflowed following a 36-hour deluge ending on May 7. About one dozen roads were closed, including Routes 105 and 106, where the river encroached on carriageways and seeped into nearby homes. The worst affected areas were Fredericton, Maugerville and Jemseg, Impact Forecasting reported.

Parts of Cape Breton Island, Nova Scotia, were also affected by flooding. Several homes in Sydney suffered flooded gardens and inundated basements while some public areas and roads were also submerged. Elsewhere in Cape Breton, the Middle River burst its banks inundating several homes and holiday homes and prompting the closure of a section of road off the Cabot Trail. The road section affected was expected to be closed for “several weeks” for repairs.

In British Columbia, two people went missing in the province’s Southern Interior. One of the two missing people was swept away while checking creek levels at Cache Creek on May 5 and is presumed dead; the other was unaccounted for and presumed dead following a landslide that swept away their home in Tappen on May 6. Hundreds of residents were evacuated from May 5 to 7, including 350 in Kelowna and 250 on Lower Nicola Indian Band land, near Merritt.

Evacuation orders were in place for several other communities in the Thomson-Nicola Regional District. Around 600 homes were evacuated from May 9 to 10 in Lake Country, Central Okanagan as more rainfall was expected to raise water levels across Okanagan Valley and flood homes, particularly around southern end of Wood Lake.

Several mudslides, landslides and washouts were also reported on numerous roads across the province of British Columbia, including the Trans-Canada Highway. A portion of Highway 97D was completely washed out near Logan Lake and a temporary bridge is in progress. Furthermore, flooding in the Garnett Valley and Summerland areas inundated fields and orchards, leaving crops and trees submerged for several days.

The full extent of damage to the agricultural industry in British Columbia was unknown, although producers in Thompson-Nicola, North Okanagan, Columbia Shuswap, Okanagan-Similkameen and Central Okanagan districts were expected to have been affected. States of emergency were declared in Grand Forks, the City of Kelowna, West Kelowna, Lumby and Fintry Delta.

More News
Related
May storms in Ontario, Quebec and the Maritimes caused hundreds of millions in damage and damaged more than 5,200 homes: Aon Benfield
IBC encouraging policyholders to discuss policy limits with insurers as B.C. wildfires continue
Aon unit pegs economic loss from Matthew at US$15 billion
CatIQ enters into agreement with Impact Forecasting to use cat event flood response footprints for Canada