Earthquakes triggered by oil and gas activity have been happening in Texas since at least 1925, new study says

Earthquakes triggered by oil and gas activity have been happening in Texas since at least 1925, and they have been widespread throughout the state ever since, according to a new historical review published online.

A Historical Review of Induced Earthquakes in Texas, published on Wednesday in the journal Seismological Research Letters, found that while the earthquakes were caused by oil and gas operations, the specific production techniques behind the quakes have differed over the decades. However, the study said, “the record clearly demonstrates that induced earthquakes have been broadly distributed in several different geographic parts of Texas over the last 90 years.” 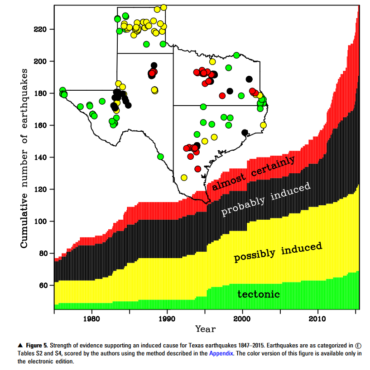 Frohlich and colleagues used questions to identify induced earthquakes in Texas historical records. The questions cover how close in time and space earthquakes and petroleum operations are; whether the earthquake centre is at a relatively shallow depth (indicating a human rather than natural trigger); whether there are known or suspected faults nearby that might support an earthquake or ease the way for fluid movement; and whether published scientific reports support a human cause for the earthquake.

Frohlich said in a press release published on SMU’s website on Tuesday that the evidence presented in the paper “should lay to rest the idea that there is no substantial proof for human-caused earthquakes in Texas, as some state officials have claimed as recently as 2015.”

At the same time, Frohlich said, the study doesn’t single out any one or two industry practices that could be managed or avoided to stop these kinds of earthquakes from occurring. “I think we were all looking for what I call the silver bullet, supposing we can find out what kinds of practices were causing the induced earthquakes, to advise companies or regulators,” he said in the release. “But that silver bullet isn’t here.”

The researchers wrote in the review that since 2008, the rate of Texas earthquakes greater than magnitude 3 has increased from about two per year to 12 per year. This change appears to stem from an increase in earthquakes occurring within one to three kilometers of petroleum production wastewater disposal wells where water is injected at a high monthly rate, the researchers noted.

Frohlich and his colleagues suspected that induced seismicity might have a lengthy and geographically widespread history in Texas. “But for me, the surprise was that oil field practices have changed so much over the years, and that probably affects the kinds of earthquakes that were happening at each time,” Frohlich said.

In the 1920s and 1930s, for instance, “they’d find an oilfield, and hundreds of wells would be drilled, and they’d suck oil out of the ground as fast as they could, and there would be slumps” that shook the earth as the volume of oil underground was rapidly extracted, Frohlich explained. When those fields were mostly depleted, in the 1940s through the 1970s, petroleum operations “started being more aggressive about trying to drive oil by water flooding” and the huge amounts of water pumped into the ground contributed to seismic activity, said Frohlich.

In the past decade, enhanced oil and gas recovery methods have produced considerable amounts of wastewater that is disposed by injection back into the ground through special wells, triggering nearby earthquakes. Most earthquakes linked to this type of wastewater disposal in Texas are smaller (less than magnitude 3) than those in Oklahoma, the study concluded.

The difference may lie in the types of oil operations in each state, Frohlich suggested. The northeast Texas injection earthquakes occur near high-injection rate wells that dispose of water produced in hydrofracturing operations, while much of the Oklahoma wastewater is produced during conventional oil production and injected deep into the underlying sedimentary rock.

For the moment, there have been no magnitude 3 or larger Texas earthquakes that can be linked directly to the specific process of hydrofracturing or fracking itself, such as have been felt in Canada, the scientists concluded.

The release said that in 2015, the Texas legislature funded a program that would install 22 additional seismic monitoring stations to add to the state’s existing 17 permanent stations, with the hopes of building out a statewide monitoring network that could provide more consistent and objective data on induced earthquakes.