Economical Insurance combined ratio down 4.6 points in first quarter of 2016 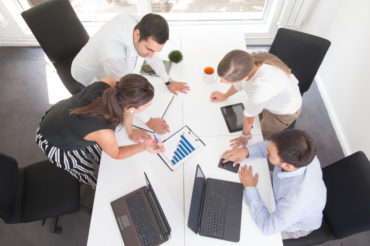 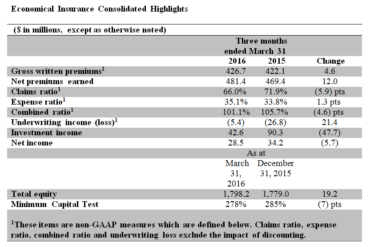 Underwriting activity for the first quarter of 2016 produced a $5.4 million underwriting loss, compared to an underwriting loss of $26.8 million in the same quarter a year ago. “This significantly improved performance was driven by improved results in commercial property and liability as a result of our underwriting and pricing segmentation improvements, and relatively benign weather conditions,” the statement said. “This was somewhat offset by increased spend on the development of our separately-branded direct channel and the replacement of our policy administration system.”

On Monday, Economical announced its multi-channel distribution strategy, with the launch of its direct business, Sonnet Insurance Company. The new digital platform will initially offer personal home insurance policies, including homeowner tenant, condo and landlord insurance, while personal auto is scheduled to follow in the second half of 2016, Economical reported.

Regarding combined ratio for the quarter, personal auto improved slightly over the same quarter a year ago (102.1% to 101.2%) due to more favourable claims development and a decrease in large losses, the statement said. The personal property combined ratio increased from 86.4% to 88.5% due to an increase in large losses, partially offset by increased average premiums and relatively benign weather conditions. Overall, personal lines produced an underwriting profit of $7.9 million, consistent with the same quarter a year ago.

The commercial auto combined ratio increased slightly compared to the same quarter a year ago, from 102.7% in Q1 2015 to 103% in Q1 2016. The commercial property and liability combined ratio significantly improved (from 119.7% to 100.1%) as underwriting and pricing actions continue to take hold. Relatively benign weather conditions and a decrease in large losses and claims frequency also contributed to the improved performance. Overall, commercial lines produced an underwriting loss of $1.8 million compared to $25.2 million in the same quarter a year ago.

Karen Gavan, president and CEO of Economical, noted in the statement that the company remains committed to its “commercial pricing strategy to address the historic profitability challenges with this line of business despite the impact on retention. During the quarter, we continued to make significant investments in the development of our separately-branded direct channel and the replacement of our policy administration system, two key elements of our continued strategy to drive profitable growth.”