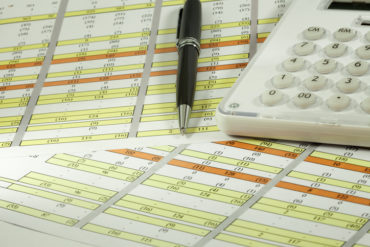 By line of business combined ratio, the personal auto combined ratio for the quarter was 121.3% in Q4 2016, “significantly impacted by a deterioration in Ontario, British Columbia and Alberta,” Economical said in the release. The Q4 2015 combined ratio was 97.6%, while the full-year 2016 combined ratio was 103.9% compared to 94.7% in 2015. “During the quarter, reserves were strengthened as a result of the ongoing trends we are seeing in this line of business,” Economical reported. “To address the challenges in personal auto, we are implementing a number of measures including improvements in pricing, underwriting and claims actions.” 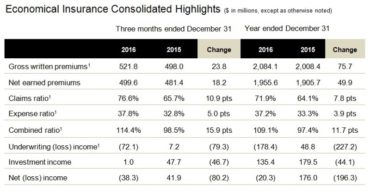 “2016 was a mixed year for Economical,” said Rowan Saunders, the company’s president and CEO, in the release. “We significantly progressed key elements of our strategy including launching Sonnet, the advancement of the demutualization process, and the acquisition of Western Financial Insurance Company, closed on Jan. 1, 2017.”

“However, our fourth quarter and full year operating performance was unsatisfactory and disappointing, notwithstanding the impact of the significant investments we have made in our infrastructure and advancing our strategy,” he continued. Besides improvements in pricing, underwriting and claims actions to address the challenges in personal auto, Saunders reported that the insurer is also “heavily investing in the replacement of the personal lines policy administration system to support our broker distribution channel, which we expect will improve operating performance over the longer term, once implemented.”