“We are really looking forward at Economical to launching our overland flood coverage later this year,” said Jeffrey Baer, manager of advanced analytics at Economical.

Baer made his comments during Aon Benfield’s Interactive Forum on Modelling and Underwriting of Flood Risks, an information session and workshop held Friday at the Hyatt Regency hotel in downtown Toronto. 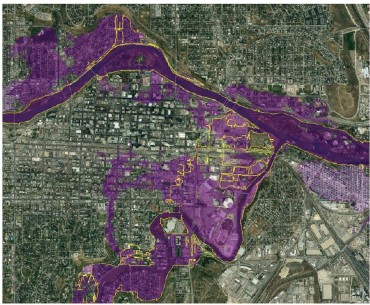 Impact Forecasting LLC, a subsidiary of London-based Aon plc, launched in 2015 a flood model that it says “covers a geographical area representing 98% of the Canadian population.”

With Impact Forecasting’s model, “you can understand the effects of policy conditions, like limits and deductibles, on flood risk,” Baer noted. “Not all of the flood models on the market are probabalistic models and there are definitely a lot of advantages to working with Impact Forecasting and others who provide probabalistic models because they allow you to understand, for example, correlations between a flooding event affecting one location, and nearby locations, which deterministic models just don’t provide.”

Both RSA Canada and Aviva Canada offer flood coverage as an endorsement to their sewer back-up polices.

The Co-operators’ product includes coverage for sewer backup, plus a river body overflowing its banks, as well as “water that overwhelms the natural or built-in infrastructure’s ability to carry it away,” The Co-operators told Canadian Underwriter earlier.

“We have elected to use the terms riverine and rain based to make it more clear for our internal stakeholders,” Baer said Friday of Economical’s flood product.

In the past, there was a “perception of uninsurability for flood on the personal insurance side,” Baer recounted. “That stemmed from the perception that flood events are not fortuitous, meaning they do not occur by chance.”

One was flooding, in June, 2013, that “began when a slow, intense low-pressure weather system delivered 80 to 275 mm of rain to the eastern slope of the Rocky Mountains, causing the Bow, Elbow, Highwood and other rivers to overflow their banks,” Alberta’s Office of the Auditor General said in its March, 2015 annual report.

That event led to 27 states of emergency, flooding of downtown Calgary (including the Scotiabank Saddledome) and an evacuation order for the entire town of High River.

Insured losses of about $2 billion meant that the June 2013 Alberta flooding knocked the 1998 ice storm in Eastern Canada to second place on the list of the most expensive natural disasters in Canadian history.

The third most expensive disaster (when measured by insured losses) occurred July 8, 2013, in the Toronto area. That day, Environment Canada reported that two separate storm cells reached the city in late afternoon. Toronto-Pearson International Airport got 126 millimetres of rain that day, but normally only gets 75 millimetres during the entire month of July.

Recounting the impact of that event Friday, Baer showed attendees of Aon’s Interactive Forum on Modelling a photo of a double-decker GO Transit commuter train half-submerged in water on a track beside the Don River east of downtown Toronto.

But the 2013 weather catastrophes in Alberta and Ontario “led us to challenge that perception and start our journey towards the development of a flood product,” Baer added.

“I have been heavily involved in the development of our new flood product, which is due to launch later this year with the support of Impact Forecasting,” Baer noted.

Aon Benfield reported in 2015 that the Impact Forecasting model had a “combined hazard resolution of 10 metres for the most exposed areas and 30 metres for remaining parts of Canada.”

One of Impact Forecasting’s partners is Opta Information Intelligence, a unit of SCM Insurance Services

That partnership, announced in March, “will help provide carriers with immediate real-time flood hazard assessment, at time of quote or new business, through iClarify”, Opta chief data scientist Greg Gilbert stated in a release at the time.

Opta iClarify is a data service that contains information on properties including construction features, satellite imagery, claims, inspections and permits.