Hot, dry and windy conditions continue in Manitoba, resulting in elevated wildfire danger levels in many areas of the province, Manitoba Sustainable Development and the Office of the Fire Commissioner said in a media bulletin issued on Friday. 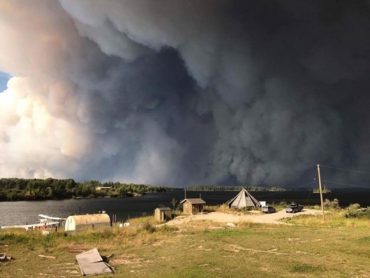 A 23,000-hectare wildfire remains about one kilometre from the community of Wasagamack. Credit: @DucharmeWood.

To date, there have been about 500 fires this season. With many other fires burning across the Prairie provinces and Northwest Territories, parts of Manitoba may experience smoky conditions, the bulletin said.

The bulletin said that a large wildfire near Wasagamack – about 23,000 hectares in size – remains approximately one kilometre from the community. Strong north winds, high temperatures and low humidity levels pushed the wildfire towards the community, requiring an evacuation of Wasagamack, St. Theresa Point and Garden Hill.

Fire crews are continuing suppression work on the fire line closest to the community, with crews also working on other spot fires located away from the main fire line. Strong south winds continue to keep smoke away from the community, the bulletin said, adding that some rain is forecast for this area on Friday.

A 1,700-hectare wildfire burning near the Fox Lake First Nation remains approximately six km from the community and approximately 1,700 hectares in size. Fire crews are continuing suppression efforts on this fire.

A 4,600-hectare wildfire near Poplar River remains approximately 3.5 km from the community. Warm temperatures and strong winds required the evacuation of residents as a safety precaution. Fire crews are continuing their suppression efforts on the north flank of this wildfire; some rain is forecast for this area on Friday.

The Canadian Red Cross continues to manage evacuations as part of an agreement with the federal government to provide disaster assistance to Manitoba First Nations.

Earlier this week, forest fires prompted the evacuation of 3,700 people from three First Nation communities in northern Manitoba, the Canadian Press reported. The fires were closest to the Wasagamack First Nation, resulting in evacuations of all residents, as well as partial evacuations in St. Theresa Point and Garden Hill. Evacuees were taken to Winnipeg and Brandon.

Stacks of blankets are at the ready for the 1000 evacuees from Wasagamack on the way to Winnipeg. #cbcmb pic.twitter.com/3DWtIVIIB1