New Brunswick’s primary electrical utility in the province, NB Power, and the province’s Emergency Measures Organization (EMO) said on Friday that they considering creating a dedicated emergency broadcast station to provide essential information to people in the province in times of crisis. 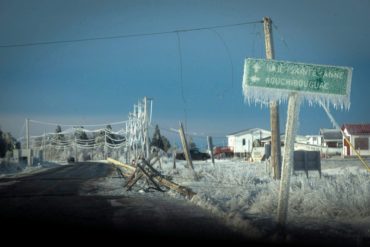 Downed power poles and an ice covered sign are shown in Escuminac, N.B., on Friday, Jan. 27, 2017. A review of a devastating ice storm in New Brunswick that left two people dead and more than 130,000 people without power says the provincial government should increase funding for emergency services and better educate the public on emergency preparedness. THE CANADIAN PRESS/Diane Doiron

The consideration is one of 51 recommendations contained in a provincial review of the Atlantic Canada storm in the winter of 2017, released on Friday. From Jan. 24-26, an ice storm hit central and eastern New Brunswick, from Miscou Island to Sackville. The intense low-pressure system resulted in severe impact that included widespread power outages that lasted for a number of days, with nearly 300,000 NB Power customers losing power.

NB Power reported in a statement that more than 600 power poles broke and required replacing, as well as 150 transformers, and 53 kilometres of distribution lines needed repairs. Some residents were left without power for more than 11 days. NB Power said the total restoration cost was $30 million.

“The ice storm of 2017 was truly a historic event with unprecedented impact and the restoration involved the work of many different partners,” Gaëtan Thomas, president and CEO of NB Power, said in the statement. “It is important that we learn from these types of events and I believe the review at both the provincial level, and internally at NB Power, will help us all work together more efficiently and be better prepared for future weather events.”

The review focused on storm preparations, response and follow up in the areas of customer and public communications, operations, logistics and supply chain, environment, contact centre performance, safety and external relations.

In addition to exploring the possibility of creating the dedicated emergency broadcast station with EMO, NB Power said that it has committed to the following:

Other recommendations included: that municipalities “of all sizes” must make their responsibilities associated with emergency planning a higher priority; NB Power and EMO should work with regional and local planners to consider the feasibility of developing and including, as part of their emergency planning processes, protocols governing generator access, distribution and sharing during extended power outages; and the Department of Social Development should take steps to get permission from clients to share personal information with responders during emergencies for the purposes of assisting in providing emergency aid.

The review was authored by Judy Wagner, clerk of the Executive Council and head of the public service. Premier Brian Gallant ordered the comprehensive review after storm recovery operations were completed. A series of public meeting were held in April, which provided residents with the opportunity to offer suggestions and ideas in response to the storm.