St. Catharines Fire Services says crews continue to battle a fire triggered by a series of explosions at a hazardous waste facility in the city that has left one person with serious injuries.

Chief Dave Upper says firefighters responded to reports of multiple blasts at Ssonix Products 2010 Inc. today just after 6:30 a.m. and found that a fire had spread to a neighbouring industrial building.

Upper says a man working at the hazardous waste facility, who was the only person inside at the time, was taken to hospital with significant burns.

He says the fire is burning in a section of the Ssonix building that contained mostly paint-type chemicals.

Firefighters are working to prevent the fire from spreading to the two other sections of the building, Upper says, which contain aerosols and a parasitic chemical that becomes toxic and explodes when heated.

He says the fire has moved into the eastern side of an adjacent building, which has contents burning inside and has experienced a partial collapse, which has made putting out the fire challenging.

“Crews are continuing their suppression operations,” said Upper at an afternoon news conference. 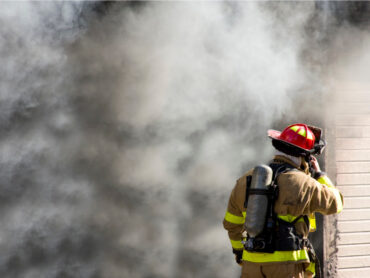 Upper said the Ministry of Environment is performing air quality monitoring to determine how the atmosphere is being affected by any burning chemicals inside the Ssonix facility.

“They’ve also got a vac-truck, so we are vacuuming up any of the run-off that’s going into the (Lake Ontario),” Upper said.

The Ministry of Labour, the Office of the Fire Marshal and the Technical Standards and Safety Authority were expected to arrive at the scene Thursday afternoon.

A neighbourhood north of the facility was evacuated in the morning due to a “black plume” of smoke blowing toward the area, Upper said, with residents sent to a community aquatics centre.

Others in the area were advised to stay inside, keep doors and windows shut and turn off furnaces to avoid letting outside air in.

Upper said emergency services were in contact with the Red Cross to prepare overnight housing for evacuated residents in case they are not able to return to their homes on Thursday night.

Aaron Reid, who lives in nearby Niagara Falls, Ont., said he heard blasts Thursday morning soon after waking up.

“I don’t know exactly what the distance is from me to where the explosion was but it’s probably in the 20-kilometre range,” said Reid, 34.

“I heard a ‘boom, boom,’ and I thought to myself ‘Oh, that’s weird.’ It almost sounded like thunder. I looked out the window and it wasn’t raining.”

It was only after Reid opened up Facebook while making coffee and saw reports of explosions in St. Catharines that he realized what he likely heard.

“I was surprised I was able to hear the explosion from that far away,” he said.

Once he got to work in nearby Virgil, Ont. – about 10 km from the facility where the blasts took place – Reid said a co-worker who lived there told him he’d also heard the blasts.

“He said it sounded like a truck had hit his house, like it woke him up from a dead sleep, just this giant boom,” said Reid, adding that his co-worker ran outside. “At that point, he could see the glow in the sky coming from the direction (of the fire).”

St. Catharines Mayor Mat Siscoe stressed that residents should stay out of the area of the explosion and fire, saying some tried to get closer to the area or fly drones over the site to take pictures and video in the hours after the explosion.

Port Weller Public School in St. Catharines, which sits just over a kilometre from the fire, said it was keeping students indoors on Thursday as a precaution.

Niagara Student Transportation Services said there would be “some significant delays and route cancellations” on bus routes on Thursday as a result of the fire.

Feature image: Niagara Regional Police block off a bridge near Lock 1 off the Welland Canal following an early morning explosion and fire in the surrounding area, in St. Catharines, Ontario, Thursday January 12, 2023. Police in St. Catharines, Ont., are evacuating some homes and businesses while warning other residents to stay indoors after reports of explosions and fire near an industrial park in the city’s north end. THE CANADIAN PRESS/Alex Lupus