Federal decision is at hand for proposed LNG plant in northern B.C.

OTTAWA – Environment Minister Catherine McKenna has a final environmental assessment of the Pacific NorthWest LNG project in hand, with the federal Liberal cabinet set to meet Tuesday in the national capital. 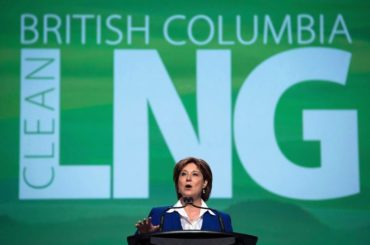 British Columbia Premier Christy Clark addresses the LNG in BC Conference in Vancouver on October 14, 2015. Dozens of international climate scientists are calling on the Canadian government to reject a proposed liquefied natural gas project in northwestern British Columbia, saying it would have dire environmental effects. Ninety academics from Canada, the United States, Australia and the United Kingdom released an open letter Monday saying the Pacific NorthWest LNG project would be one of the country’s largest greenhouse gas emitters, and if built, would undermine Canada’s climate change commitments. THE CANADIAN PRESS/Darryl Dyck

A decision from the Liberal government on the proposed $36-billion project in northern British Columbia must be made no later than next Monday.

When it happens, it will mark the first true litmus test of how Prime Minister Justin Trudeau navigates competing interests between environmentalists and First Nations concerned about climate change and salmon habitat and pro-development advocates, including the B.C. government of Christy Clark.

The liquefied natural gas processing plant on Lelu Island near Prince Rupert would ship 19 million tonnes a year of frozen, liquefied gas to markets in Asia while pumping more than five million tonnes of carbon dioxide annually into the atmosphere.

The government’s acceptance or rejection of the project will set the table for an autumn of crucial decisions on a national climate change plan and energy sector infrastructure.

McKenna is to sit down with her provincial and territorial counterparts next Monday in Montreal to begin hammering out a pan-Canadian strategy for meeting Canada’s international commitments on reducing greenhouse gas emissions. 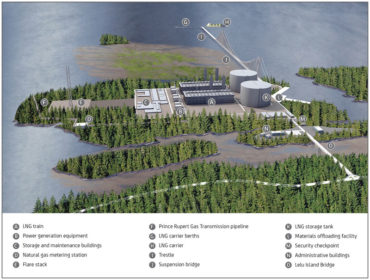 A draft assessment of the LNG project, whose major partner is Malaysia’s state-owned Petronas, was released in February by the Canadian Environmental Assessment Agency. The agency found that the project was “likely to cause significant adverse environmental effects,” although it said mitigation measures would result in no serious harm to fish habitat.

Carbon dioxide emissions will reach 5.3 million tonnes a year from the LNG plant, according to the draft report, not including another 6.5 million to 8.7 million tonnes produced from natural gas collection and transportation.

“This will increase the B.C. and national emission totals by 8.5 per cent and 0.75 per cent respectively, based on 2011 levels,” said an early project assessment.

“To date, clear guidance on how Canada and B.C. will address this issue has not been communicated.”

Caitlin Workman, a spokeswoman for the federal environment and climate change minister, said the environmental assessment “is one part of what the final decision-making will take into account.”

“The final decision will include the best available facts and science and evidence at hand needed to make a decision that does the best to protect the environment while considering our country’s economy,” Workman said.

A spokesman for Pacific NorthWest LNG said the decision to begin construction – should the project receive a federal green light – must still go to the company’s shareholders.

“At this time, we are still awaiting the finalization of the Canadian Environmental Assessment Agency’s extended review of the project,” Spencer Sproule said in an email.

“Once a decision by the government of Canada is made, Pacific NorthWest LNG will conduct a total review of the proposed LNG facility prior to tabling it to the project’s shareholders for a Final Investment Decision (FID).”

Natural Resources Minister Jim Carr, meanwhile, faces a mid-December deadline for a federal decision on the proposed expansion of the Trans Mountain oil pipeline from Alberta to the Pacific port in Burnaby, B.C.

And sometime this fall, as negotiations over climate change plans and resource projects continue, the Liberal government says it will formally ratify the international Paris Accord, under which Canada committed to cut its greenhouse gas emissions 30 per cent below 2005 levels by 2030.